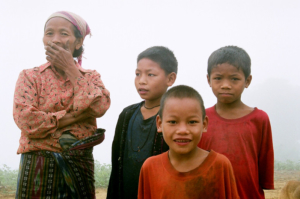 Human trafficking in Laos, despite its moderate severity relative to other countries, nonetheless remains a critical driver of sexual exploitation and forced labor. The 2021 Trafficking in Persons Report, issued by the U.S. Department of State, categorizes Laos as a Tier 2 nation. The Laos government thus falls short of the TVPA’s minimum standards for eliminating trafficking, in spite of efforts to meet such standards.

Traffickers predominantly deliver adolescent Lao girls and women to Thailand and China, though at times Malaysia and Vietnam, where they then coerce the victims into commercial sex. Otherwise, the women, under coercion, perform domestic, factory and agricultural work. In particular, traffickers frequently sell the women sent to China as brides. Trafficked Lao boys and men, on the other hand, typically enter Thailand’s fishing, construction and agricultural sectors. Traffickers attract victims with promises of reliable job opportunities in neighboring countries.

Lao victims of human trafficking are most often migrants seeking work abroad. Otherwise, they are impoverished students disinterested in continuing education and instead preferring to work to contribute income to their families, according to the U.S. Department of State. Such individuals either voluntarily and legally enter destination countries or traffickers enable them. The lax management at border crossings resulting from the insufficient training of provincial and district level immigration authorities especially enables illegal entry. Additionally, foreign traffickers have begun working with Lao middlemen to facilitate the transit of victims across borders.

Since the start of the COVID-19 pandemic, large amounts of both legal and illegal Lao workers have returned home. This created rampant unemployment and dramatically increased demand for work. Such conditions have rendered poverty-stricken Lao workers exceedingly susceptible to trafficking, seeing as they opt for low-paying and ethically-gray work within Laos. For instance, the closure of the Laos-Thailand border, coupled with increased willingness to engage in domestic commercial sex, has led to a surge in sex trafficking, the U.S. Department of State reported.

The Laos government gravely punishes any form of trafficking. For instance, Article 215 of the penal code criminalizes trafficking, punishable by five to 15 years of imprisonment. The fine is ranging from 10 million to 100 million Lao kip (equivalent to $1,080 to $10,780), according to the U.S. Department of State. The Article further stipulates that if the crime implicates an underage victim, the fine increases to 500 million Lao kip (equivalent to $53,880) at most.

Nonetheless, such measures prove insufficient for resolutely curbing trafficking. Several gaps exist within the current penal system. For one thing, law enforcement is often reluctant to extend severe punishments to first offenders. Moreover, there is little protocol for investigating potential perpetrators, so as to preemptively stem trafficking. The Anti-Trafficking Department also remains the only authority capable of identifying trafficked victims, according to the U.S. Department of State. Consequently, the Laos government lacks a comprehensive and standardized mechanism for identifying and helping victims.

The Lao government is working internally with the Lao National Chamber of Commerce and Industry. It also works externally with the International Labor Organization to implement several changes, as stated at the International Labour Conference. This includes expanding the government budget for anti-trafficking efforts and standardizing training for police and legal officers.

To this end, the government is also developing a formal curriculum for border crossing administrators, such that they more consistently identify victims. The government further seeks to collect and publicize government anti-trafficking efforts to improve transparency and increase public confidence.

Sengsavang, operating in Laos since 2006, is an NGO that works closely with the Lao government to rehabilitate Lao victims of trafficking. The organization has a rehabilitation center in Thailand, in Savannakhet, a hotspot of cross-border trafficking. Sengsavang specifically provides education and vocational training, such that victims can reintegrate into society. To this day, the organization has prevented more than 13,000 individuals from falling victim to trafficking. It also supported over 500 trafficked young girls and women.