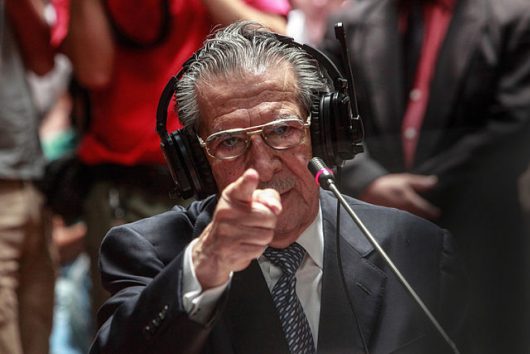 Guatemala is known for its government’s immense crimes against humanity during the 20th century. While there have been efforts to improve human rights in Guatemala, the country had not seen much progress until very recently.

The nation has been plagued by powerful criminal organizations and gangs for many years. They commit violence and extortion, terrorizing local communities and instilling fear in the citizens, and ultimately pushing many Guatemalans to emigrate from the country. Unfortunately, the criminal justice system is still incredibly corrupt, making it difficult for human rights activists to do work on the ground because they face the threat of violence and intimidation from corrupt government officials and local criminal organizations.

In 2013, retired military general Efrain Rios Montt was convicted of crimes against humanity and sentenced to 80 years in prison. General Montt led a military government from 1982-1983 and carried out heinous massacres of unarmed civilians. This conviction would have been a huge step for Guatemala, but the sentence was overturned by the Constitutional Court and Montt was set free. This was a major failure in the eyes of human rights activists because it demonstrated that the government would continue to pardon those in power even when they have committed a crime.

That being said, thanks to the aid of the International Commission Against Impunity in Guatemala (CICIG), there have been a few successful prosecutions in cases of violent crime and corruption. In May 2014, General Montt was re-tried and was once again convicted. This time, however, the conviction remained in place, signaling a win for the Guatemalan people.

In February 2017, the Guatemalan courts made a conviction regarding crimes against humanity in the form of sexual violence and sexual slavery. This was the first prosecuted case of sexual violence that related to the country’s 36-year internal conflict. It has been incredibly difficult to get convictions for the crimes and massacres committed during the conflict because of the level of corruption in the nation, but this was a huge step towards justice.

Through continued assistance from CICIG and the Office of the United Nations High Commissioner for Human Rights, Guatemala is on the right track to being a safe country for its citizens. Continued foreign aid can help reduce violence and poverty and increase economic opportunities and good governance. There is a lot of work to do regarding corruption in the government and atoning for past crimes against humanity, but the future for human rights in Guatemala is looking fairly bright.