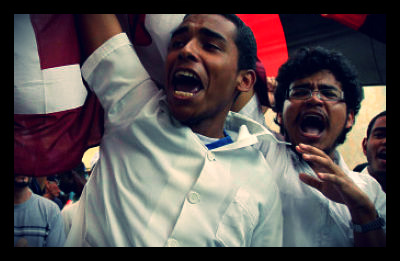 December 10th, 2013 is the 20th anniversary of the establishment of the World Conference on Human Rights.

The UN General Assembly first proclaimed Human Rights Day in 1948. However, the efforts were renewed in 1993 at the World Conference on Human Rights in Vienna through The Vienna Declaration and Program of Action.

The Universal Declaration of Human Rights was adopted in 1948. It consists of a preamble and 30 articles.

The Declaration has been translated into more than 380 languages and dialects: making it the most translated document.

This universal document defines fundamental human rights and freedoms that are to be applied to protect anyone, regardless of race, gender or ethnicity.

The human rights theme this year is Working For Your Rights, with an emphasis on looking forward to looming challenges.

At this time, let us reflect on and celebrate the achievements in human rights over the past 20 years. Broadly, there have been notable advancements in the areas of women’s rights, the development of law to achieve accountability for human rights abuses, the protection and promotion of the rights of marginalized groups and a much greater understanding of the universality and indivisibility of human rights.

1.Economic, social, cultural, civil, and political rights and the right to development are recognized as universal, indivisible, and mutually reinforcing rights of all human beings, without distinction.

2. Human rights have become central to the global conversation regarding peace, security and development.

3. New human rights standards have built on the 1948 Universal Declaration of Human Rights and the implementation of international human rights treaties is significantly improved.

4. Additional explicit protections in international law now exist covering, among others, children, women, victims of torture, persons with disabilities, and regional institutions. Where there are allegations of breaches, individuals can bring complaints to the international human rights treaty bodies.

5. Women’s rights are now acknowledged as fundamental human rights. Discrimination and acts of violence against women are at the forefront of the human rights discourse.

6. There is global consensus that serious violations of human rights must not go unpunished. Victims have the right to claim justice, including within processes to restore the rule of law following conflicts. The International Criminal Court brings perpetrators of war crimes and crimes against humanity to justice.

7. There has been a paradigm shift in the recognition of the human rights of people with disabilities, especially and crucially, their right to effective participation in all spheres of life on an equal basis with others.

8. There is now an international framework that recognizes the challenges facing migrants and their families which guarantees their rights and those of undocumented migrants.

9. The rights of lesbians, gays, bisexuals and transgender individuals have been placed on the international agenda.

10. The challenges facing indigenous peoples and minorities are increasingly being identified and addressed by the international human rights mechanisms, especially with respect to their right to non-discrimination.

11. The Human Rights Council, set up in 2006, has addressed vital and sensitive issues and its Universal Periodic Review, established in the same year, has allowed countries to assess each other’s human rights records, make recommendations and provide assistance for improvement.

12. Independent human rights experts and bodies monitor and investigate from a thematic or country-specific perspective. They cover all rights in all regions, producing hard-hitting public reports that increase accountability and help fight impunity.

13. States and the United Nations recognize the pivotal role of civil society in the advancement of human rights. Civil society has been at the forefront of human rights promotion and protection, pinpointing problems and proposing innovative solutions, pushing for new standards, contributing to public policies, giving voice to the powerless, building worldwide awareness about rights and freedoms and helping to build sustainable change on the ground.

14. There is heightened awareness and growing demand by people worldwide for greater transparency and accountability from government and for the right to participate fully in public life.

15. National human rights institutions have become more independent and authoritative and have a powerful influence on governance. Over a third of all countries have established one or more such institutions.

16. The United Nations Fund for Victims of Torture has assisted hundreds of thousands of victims of torture to rebuild their lives. Likewise, the United Nations Voluntary Trust Fund on Contemporary Forms of Slavery, with its unique victim-oriented approach, has provided humanitarian, legal, and financial aid to individuals whose human rights have been violated through more than 500 projects.

17. Victims of trafficking are now regarded as entitled to the full range of human rights and are no longer perceived to be criminals.

18. A growing consensus is emerging that business enterprises have human rights responsibilities.

19. There are now guidelines for States which support freedom of expression while defining where speech constitutes a direct incitement to hatred or violence.

20. The body of international human rights law continues to evolve and expand, to address emerging human rights issues such as the rights of older persons, the right to the truth, a clean environment, water and sanitation, and food.

There is much to be celebrated. However, many people continue to not have a voice.

How can you participate?

-Support education through programs such as UNICEF’s Education First, as education is an empowering tool.

-Protect and use your freedom of speech. Journalists work to give a voice to oppressed people, and are often oppressed themselves while doing this valuable work. Find ways of supporting journalists and using your own voice to protect the human rights of oppressed communities.

-Use social media to raise awareness of Human Rights Day and human rights accomplishments or concerns that interest you.

-Contact your congressional leaders and ask them to support USAID or specific bills dealing with human rights issues, such as the Global Food Security Act of 2013 (H.R. 2822). For additional human rights related bills visit: https://borgenproject.org/legislation/