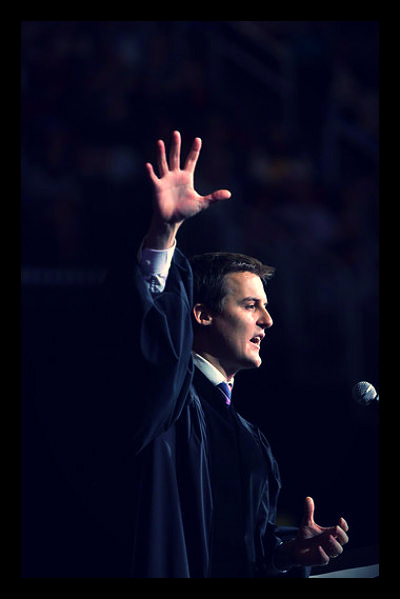 The Global Poverty Project works to campaign the government, businesses, and consumers to take action that will create a systematic change for the world’s extreme poor.  The project also is working to build a movement that engages and educates people, helping them to take simple but effective individual actions for change.

He told graduates how his organization has raised $4.3 billion dollars for the world’s poor.  The organization would like to see better aid, better trade, more ethical, fair and balanced trade, and an environment that invests in education, infrastructure, and governance. The Global Poverty Project believes that working to achieve these goals will create an enabling environment for developing countries to work their way out of poverty.

At his commencement address, Evans elaborated on the importance of creating your own path. Amidst pictures and videos of slums around the world, Evans told graduates that taking an unorthodox path is bound to test our character. He used his life and chosen career path as an example to explain that going against people’s expectations for your life puts things into perspective and reveals your greatest hopes and greatest ideals.

Evans’ message rings true to the value of hard work and determination in tackling problems and obstacles. His speech illuminates to graduates that sometimes, making an unorthodox choice can improve not only your life, but also maybe even the lives of millions or billions of people around the world.