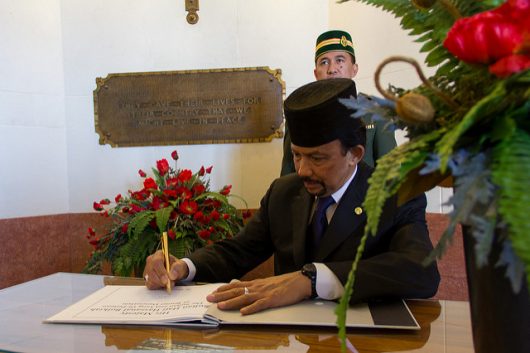 Brunei is a small nation located in the northern coastal area of the island of Borneo, which also encompasses parts of Malaysia and Indonesia. Brunei‘s territory extends itself through an area of 5,765 kilometers of land, where about 423,000 citizens live.

How to help people in Brunei is not an easy question to answer at first glance. The fact is that despite its size, Brunei’s economy is considered to be one of the best performing in the world.

The country mainly exports liquefied gas and crude oil across the globe; natural gas and petroleum represent 60% of the country’s economy. Brunei’s extended forest territory allows it to produce abundant amounts of non-renewable resources and energy.

In spite of Brunei’s level of productivity, the issue of how to help people in Brunei remains because, despite the country’s great wealth, the social and political system causes difficulty for Brunei’s citizens.

As an absolute monarchy led by Sultan Hassanal Bolkiah, freedom of speech has been limited within the media, including radio, television, and print, as well as for citizens.

In 2014, Brunei adopted sharia law, a list of laws based on the religion of Islam. Consisting of three phases, two of which have to be yet implemented, sharia law is currently enforced among Brunei’s citizens.

The only approved phase for the moment includes prison sentences for what most developed first world countries would consider minor. Pregnancy outside marriage, failing to attend Friday prayers, propagating religion other than Islam, among other offenses, are severely punished with prison sentences or fines.

Organizations such as the United Nations have spoken out regarding Bolkiah’s intentions, but despite commenting on the sultan’s ideas for the future of Brunei, the country remains part of the United Nations due to providing free medical care, education and more to its citizens.

Boycotts of the Beverly Hills Hotel and other properties that Bolkiah owns have been enacted by numerous international companies to put pressure on the sultan to repeal sharia law. Celebrities such as Ellen DeGeneres and Elton John have taken up the issue to bring awareness to the inequality and discrimination that is currently taking place in Brunei.

How to help people in Brunei is a social issue rather than an economic one. Brunei is a country that violates human rights every day and no organizations are actively fighting against it. The imposition of sharia law in Brunei is continuous and awareness is key in order to eradicate such human rights violations.