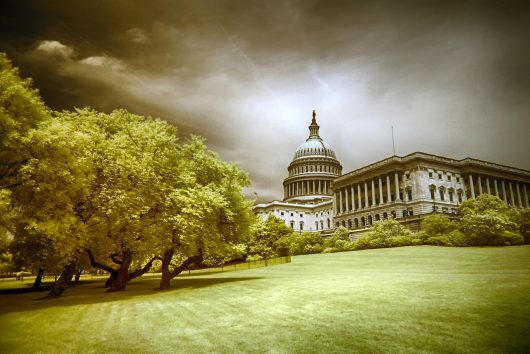 The United States Congress is divided into two chambers: the House of Representatives and the Senate. The House of Representatives allows for no more than 435 officials to be divided among the 50 states, the District of Columbia and the five U.S. territories (American Samoa, Guam, Northern Marina Islands, Puerto Rico and the U.S. Virgin Islands). Each of the 50 states is guaranteed two senators regardless of population size. However, neither Washington, D.C. nor the U.S. territories have representation in the Senate.

Officials from the House are commonly referred to as congressmen, congresswomen or representatives. How the 435 seats are split is contingent on the population size of the states, and D.C. and the U.S. territories are allowed one seat apiece.

To illustrate how representation is divided, consider New York: The geographical size of New York is hardly a third of the size of Montana, but New York’s population is 19 times greater than Montana’s. This explains why New York (27 representatives) has far more representatives than does Montana (one representative).

The public elects members of Congress to two-year terms to serve in the House of Representatives. It is important to remember that these elected officials are in place to serve their constituents. Asking government officials to support global poverty reduction bills and other important issues is as simple as emailing or calling Congress. It is a representative’s job to listen, so constituents should make their voices heard.