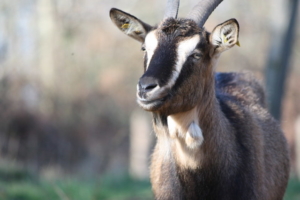 Goats are the animals of choice for many humanitarian groups across the world looking to provide life-saving, sustainable aid. From East Asia to Haiti, these animals have saved the lives of countless families suffering from poverty and starvation. Goats are particularly sought after in countries where agriculture is prominent. Nearly 85 percent of the world’s farmers are smallholder farmers, meaning that they limited resources. Smallholder farmers typically earn income through the cultivation of one or two crops planted on a tiny plot of land. Many humanitarian groups are highlighting how goats fight poverty through various campaigns.

Goats are the animal of choice for humanitarian groups for a plethora of reasons. From their behavior to their eating patterns, goats are easy to raise and supply marketable produce. For small farmers, goats are much less expensive to raise than cows or buffalo. Their diet mainly consists of grasses and shrubs, allowing them to survive even through inclement conditions such as droughts and crop failure.

Furthermore, goats reach sexual maturity at an early age and reproduce rather quickly. A female goat can give birth up to two times a year. In many impoverished areas, baby goats benefit the entire community as opposed to just one family – instead of being kept on the same farm as its mother, a baby goat is often gifted to an impoverished neighbor.

Many children living in impoverished conditions do not have adequate access to a nutritious diet. Goats can provide the milk, cheese and protein needed to balance a child’s nutritional needs thus reducing dependency on protein from plant-based sources. This is particularly beneficial for children living in countries like Haiti where crops are often destroyed by natural disasters.

Rearing goats helps families living in poverty to support their children’s educational needs in more than one way. Goats offer a means to break the cycle of generational poverty, providing households with a source of income to send their children to school. Furthermore, with healthful meal options from goats, children will have full stomachs during the day allowing them to focus on their studies.

One organization, in particular, has recently participated in the effort to alleviate poverty with goats. SIDA, short for the Swedish International Development Cooperation Agency, launched a program in western Mali following a 2014 drought. To help, SIDA provided families suffering from food shortage with two assets: goats and seeds. With these two resources, the organization was able to successfully stabilize Malinese livestock herds to combat the lack of flourishing greens.

SIDA was not only able to alleviate poverty with goats in western Mali, but the organization took things a step further by sharing best practices such as care techniques to ensure sustainability. To date, SIDA’s record in western Mali proves to be exemplary. About 2,610 households in the country received goats to combat food insecurity and provide hope for future generations.

The Future for Goat Farmers

Countless personal stories from smallholder farmers have shown the lifechanging effects a goat can have on a community. These creatures seem to be the perfect solution for rural penury, however, there is one problem that stands in the way: goats are not immune to diseases. Organizations like the African Union Inter African Bureau for Animal Resources have been readily responding to this issue, but it demands much more attention as goats have become an integral part of farming life for poor families around the world.