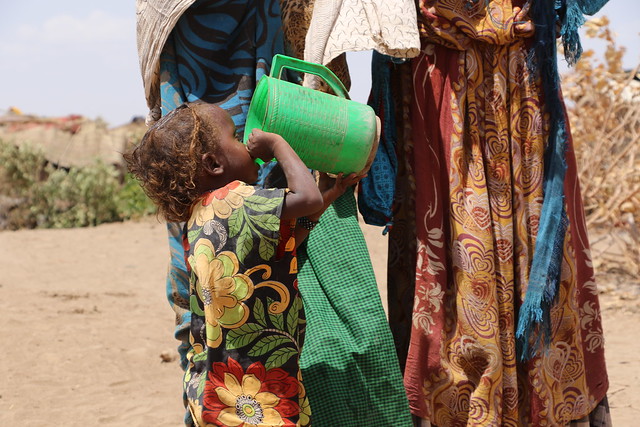 The Horn of Africa, a region where nearly 80 percent of the population relies on farming for survival, has been hit with a prolonged and harmful drought. Periods of dry weather are not uncommon in the area. However, such a significant timespan without any rainfall spells disaster for those who require healthy crops to make a living. The Horn of Africa drought is even more dangerous considering climate change and the United States’ reduced foreign aid budget.

The Horn of Africa is well acquainted with droughts. The region has faced several in recent years. However, the current dry spell is severely affecting the ability of families to obtain food, making it one of the harshest droughts the region has seen.

The Food and Agriculture Organization of the United Nations (FAO) reports that the ongoing Horn of Africa drought has triggered widespread food insecurity, especially among families raising livestock. Expecting the drought to cause increased hunger, the FAO issued a pre-famine alert for Ethiopia, Kenya and Somalia. The governments of Kenya and Somalia have already declared a national disaster.

Climate change is a major factor influencing the impact of the African Horn drought. According to the State of Food Security and Nutrition in the World Report 2018, the number of disasters related to climate change have doubled since 1990. These events include flooding, droughts and fires caused by extreme dry heat.

The people who live in the region have remarked on the disastrous consequences of climate change. Birhan, an Ethiopian mother of four, commented, “We have not seen an improvement in the climate situation… The drought is becoming recurrent. But if there is rain, it is excessive and destroys the crops.” Birhan and 1.5 million other people are able to receive emergency rations during the drought thanks to the USAID food program. However, the aid is not enough to quell the rising need for food, livestock and water.

In March, the White House proposed the 2020 fiscal budget. This budget aims to cut U.S. foreign food and financial assistance by 24 percent. This funding reduction will exacerbate the adverse impacts of the Horn of Africa drought. Without assistance from developed nations such as the U.S., access to food and clean water will become more difficult for those inhabiting the affected regions.

Matt Davis is the East Africa regional director for Catholic Relief Services, an organization overseeing a U.S.-funded food program in the area. Davis commented on the federal budget’s impact on struggling populations: “We’re very concerned by the deteriorating conditions in the region where we are seeing families–whose lives rely on the land–unable to cope,” he said. “We are concerned the administration’s budget could abandon millions of families around the world just when they need help the most.”

Climate hazards and reduced U.S. assistance have worsened the impact of the Horn of Africa drought. Several organizations are working to help families with food and financial aid to combat these issues. In 2017, the European Union decided to further aid the people of Somalia, Kenya and Ethiopia during the recurring drought by offering nearly €260 million in financial assistance.

The Horn of Africa drought is cyclical in nature. The countries most affected by the drought are seeking localized solutions to surviving climate-related issues. Kenya appears to be moving forward in this area, with the government investing in community water sources independent of rain-fueled agriculture.

Ethiopia has also made strides in building a defense against the drought by implementing The Productive Safety Net Programme. This program helps food-insecure communities build stockpiles of food to prepare for drought and ultimately become food self-sufficient.

Coordination between the affected countries and more developed nations is necessary to build resistance to drought and other disastrous climate-related issues. Global financial and food assistance programs, a U.S. budget that does not drastically reduce foreign aid and localized efforts to build resistance against drought are effective approaches. These strategies will help the Horn of Africa move closer to a truly thriving expanse of subsistence farming.