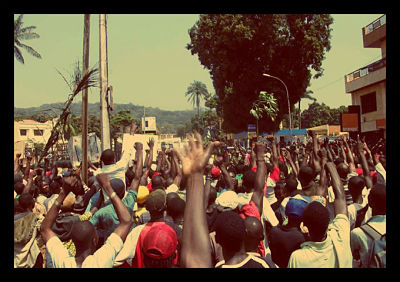 In Port-au-Prince, a British Red Cross employee and his Haitian partner were targeted in a series of homophobic attacks perpetrated by locals wielding petrol bombs and rocks. The attack, which unfolded at a celebration of the couple’s engagement, injured several people before the police arrived to dissolve the violence.

The attack unfolded at a pivotal time in the larger national conversation concerning gay marriage. Last month, over one thousand Haitians protested in the streets for legalized marriages, an unprecedented event in a country where homosexuality too often carries a deleterious social stigma.

On August 19th, the United Nations in Haiti addressed the rise in homophobic violence in the country, urging “…all Haitians to continue working together towards the construction of a state based on the respect for the rule of law; respect for others, tolerance, individual dignity and human rights.”

The UN statement also underscored that Article 19 of the Haitian Constitution grants the right “…to life, health, and respect of the human person for all citizens without distinction, in conformity with the Universal Declaration of the Human Rights”.

Tellingly, Haiti has entered the international human rights conversation revolving around LGBT issues, a tendentious discourse that has proven to be an ongoing struggle in both developed and developing nations alike.