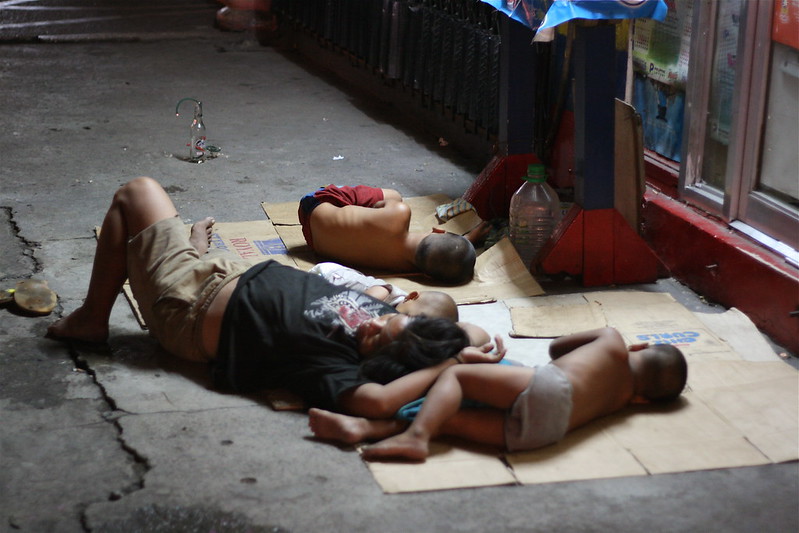 The Philippines is one of the fastest-growing economies in Southeast Asia, yet it is facing a homeless crisis. There are approximately 4.5 million homeless people, including children, in the Philippines, which has a population of 106 million people. Homelessness in the Philippines is caused by a variety of reasons, including lost jobs, insufficient income or lack of a stable job, domestic violence and loss of home due to a natural disaster. The government and non-governmental organizations (NGOs) are working to address this issue.

In the Philippines, families end up homeless for many reasons, including:

Homeless children are among the most vulnerable of the homeless in the Philippines. There are approximately 250,000 homeless children; however, that number could be as high as 1 million. Children leave home and end up on the streets because of the excessive beating from their parents, poverty or sexual exploitation.

When children are on the streets, they can face problems such as sexual exploitation, abuse and prostitution. Although victims of circumstances beyond their control, children who live on the street are often viewed as criminals or future criminals resulting in discrimination from the police. Additionally, to numb their pain and their hunger, some children may turn to drugs. Both the external and internal factors that children face make it very difficult for them to escape the street life.

Addressing Homelessness in the Philippines

The government, NGOs and religious institutions are working help the homeless. Government programs include the Modified Conditional Cash Transfer for Homeless Street Families program (MCCT-HSF). This program provides financial support, such as housing grants and funding for health and education, to homeless families in Metro Manila.

To help street children, ASMAE-Philippines travels the streets of Manila to teach kids on the basics of hygiene. The organization also provides children with school support, as well as supporting other NGOs in the area. Kanlungan sa ER-MA Ministry, Inc. is another organization that works to educate street children, though projects that teach children about hard work while providing them with an income.

Although the government and NGOs have made efforts to help the homeless population, much more still needs to be done. Moving forward, these initiatives need to be increased in order to significantly reduce homelessness in the nation.