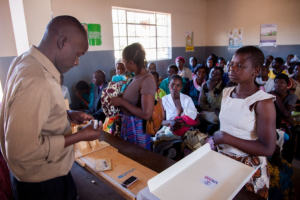 While it remains in the top 10 countries with the highest HIV rates, there is a significant reduction in the rates of HIV/AIDS in Malawi. This plummet, from 14.9% in 2000 to 8.1% in 2020, is likely to continue its decrease with the improvements to the diagnosis and care system.

The introduction of the Malawi Population-based HIV Impact Assessment (MPHIA) in 2016 has made it easier to track the progress of testing and treatment for HIV/AIDS in Malawi. The data from the 2022 assessment shows that Malawi has met two-thirds of the UNAIDS targets, with at least 95% of those aware of their status initiating treatment and 95% of those on treatment experiencing viral suppression.

The one target that Malawi must still meet is for 95% of persons with HIV to be “aware of their status.” In Malawi, where 88.3% of those with HIV are diagnosed, this target is not out of reach, according to the Population-Based HIV Impact Assessment (PHIA).

HIV self-testing is becoming more common in Malawi and studies show that community-led delivery of self-tests is safe, economical and reliable.

However, money and availability are not the only barriers to accessing HIV tests. There is a global need to overcome the stigma surrounding HIV; with a strong correlation between prejudicial attitudes toward HIV and reluctance to test. For many sufferers, attending a testing site is a deterrent, which is another explanation for why many remain untested. The increasing number of home tests could be vital to overcoming this hurdle.

The pandemic saw a 35% drop in HIV tests, according to Nuha Ceesay, UNAIDS country director, exacerbating the struggle to reach the 95% target.

As we come towards the end of the COVID-19 health emergency, education to combat stigmas and increasing testing services are integral measures for Malawi to reach UNAIDS targets. COVID-19 exacerbated existing stigmas with the misconception that those with HIV are more likely to catch Coronavirus. The pandemic birthed a new discriminatory term for people diagnosed HIV positive, “corona carrier,” Reuters reports.

COVID-19 has not permanently regressed in the fight against HIV. Despite the pandemic’s detrimental impact on the health care system of the country, it sustained some positive progress. Of those suffering from HIV/AIDS in Malawi, 98.6% were still referred for vital antiretroviral treatment throughout this period.

Uneducated young women are one of the main disadvantaged social groups at the center of this health care emergency.

Despite making some progress, Malawi is still far from achieving gender equality. Health care access issues are no exception to this and adolescent girls and young women are the most vulnerable to HIV.

Research suggests that women experiencing poor health are likely to delay seeking medical support, prioritizing their family due to social norms and expectations. Connecting issues, such as lack of education and unemployment, leads more women towards sex work, only increasing the likelihood of contraction.

The lack of testing makes children vulnerable targets of the AIDS crisis, with UNICEF identifying 25% of children with HIV/AIDS in Malawi as unaware of their status and only half of the HIV-positive children receiving treatment.

This is a cycle mostly formed by the 20%-45% risk of HIV-positive mothers passing HIV onto their children. These children often lack lifesaving treatment, with 20% of infants dying before age one without antiretroviral therapy (in sub-Saharan Africa).

Improving resource allocation and support for women and children helps to interrupt this cycle. Through vital counseling on the necessities of treatment, training of health care professionals, education, career prospects and prevention of sex work, the epicenter of the HIV epidemic could be the focal point of change.

Foreign aid is crucial for Malawi to reach its UNAIDS targets and USAID data shows it is one of the countries in the world most dependent on foreign aid, with 99% of its HIV expenditure coming from international financial support.

Prompting the government to prioritize international aid, such as funding the coronavirus response, would alleviate pressure from Malawi’s health care system and allow the dedication of more time and resources to HIV testing. Organizations such as MANASO, a major advocate and host of Malawi World AIDS Day, are striving toward lower infection rates.

Its current plans include the Family Planning Budget Accountability Project, focused on advocation for the government to fund family planning essentials and for the spending of these funds to be appropriate and effective. It has achieved success in meeting government officials, engaging in advocacy and conducting meetings and workshops with chief security officers (CSOs). The family planning budget has also received more funds, seeing an increase from 2017 to 2019, as a result of this work.

Lobbying one’s leaders and supporting groups like MANASO enables the fight against HIV in Malawi to progress, with international support having a vital impact on treatment, testing and prevention goals.