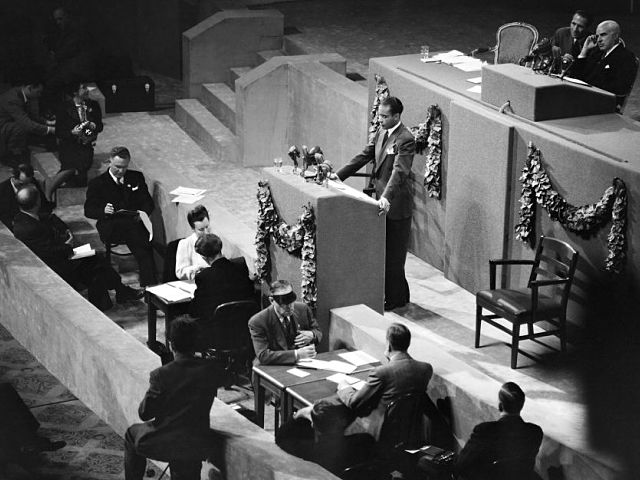 A key event in the history of the United Nations is the San Francisco conference, which convened on April 25, 1945. The conference was presided over by Roosevelt, British Prime Minister Winston Churchill, and Soviet Premier Joseph Stalin. Fifty nations were represented at this conference, most of which were from the North, Central, and South American republics.

The nations met in San Francisco to draw up the U.N. Charter, which was signed on June 26, 1945. However, the U.N. did not officially come into existence until October 24, 1945 when the majority of the signatories ratified the Charter. The charter did not come into force until this date because the five permanent members of the U.N. Security Council — China, France, Russia, the United Kingdom and the United States — ratified it.

The main goal of the U.N. Security Council is to maintain international peace, which was among the original aims that many nations had in mind when founding the U.N. Of the five permanent members of the Security Council, all but France were intended to serve as the enforcers of peace, as claimed by Roosevelt. The other allied nations were tasked with establishing other organizations, such as the Food and Agriculture Organization (FAO), to aid the U.N. in its tasks.

Prior to the more well-known San Francisco conference was the Quebec conference of August 1943. During this conference, Secretary of State Cordell Hull and British Foreign Secretary Anthony Eden decided to begin drafting a declaration calling for an international organization.

Since its creation, the U.N. has addressed many global issues, such as women’s rights, children’s rights and the refugee crisis. Keeping in mind its original goal of maintaining world peace, the U.N. created the U.N. Emergency Force (UNEF) on November 7, 1956. The UNEF, as well as many other organizations and individuals, have been awarded Nobel Peace Prizes.

Today, U.N. membership totals 193 countries and includes almost every single recognized independent state. The U.N. still focuses on its main goals of peacekeeping and building, conflict prevention and humanitarian assistance. Though it has accomplished a lot since its founding, the history of the United Nations has only just begun and the organization has a lot of work in store for the future.