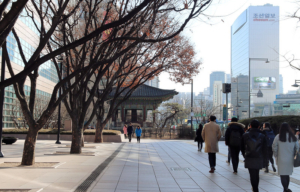 South Korea has a highly developed economy and hard-working citizens and many know it for its evolution from a developing nation to an advanced state within a few generations. South Korea’s citizens follow the country’s intense work ethic, which allows its cities, such as the famous capital city Seoul, to continue their progress in technological advancement. Although one can see the results of the South Korean hustle through the maturation of its economy in recent history, the hierarchy in South Korea has also had damaging effects on young workers and the elderly.

Corporate culture in South Korea centers around hierarchy, in which your age and status are crucial. The work-life balance is unstable, as late at night, managers will often ask employees to come in early the next day or to finish work when they are not on the clock. However, while it is acceptable for employees to refuse this extra work, employees who comply often receive superior treatment. Around the world, within corporate culture, higher compensation usually follows greater responsibility and vice versa. However, within the hierarchy in South Korea, others expect employees with lower status to work harder to help those above them. Stagnant wages, which are highly dependent on long-term loyalty to the company, paired with long working hours pose a challenge to young professionals trying to afford a living.

One can consider some young employees predisposed to elderly poverty, as income inequality in the first half of their working years makes retirement planning extremely difficult.

Additionally, it is common for bosses to pressure employees to go out for food and drinks after the office closes, staying long past office hours. Oftentimes, this leads to unproductive mornings since the lively night before might have included drinking and socializing.

In general, lower productivity commonly results in less consumption, as the economy is not able to consume and produce services for the same quantity of labor. Because some employers value looking busy rather than true productivity, productivity within Korea has struggled.

Despite one’s age being a factor within the hierarchy, surprisingly half of the South Korean elderly live in poverty. In 2020, 40.4% of South Koreans 66 years or older were living in poverty.

Due to South Korea’s aging population, experts believe that nearly one in two people living in poverty in the future will be elderly.

One crucial reason for this is that the younger generation cannot support their parents and South Korean corporate culture contributes to this issue. Hustle culture in South Korea generally requires employees to work longer hours than in comparison with other countries within the Organization For Economic Co-operation and Development (OECD). Average working hours in Korea are 17% higher than the OECD average.

With the westernization of the Korean workplace and subsequent family expectations, the younger generation is less inclined to live with their parents to support them. In 1994, 54.7% of elderly people lived with their children, however, this number decreased to 23.7% by 2017.

Aside from the inability of young professionals to care for their parents, increasing poverty among the elderly is due to the structure of the salary system within the corporate culture. Hierarchy dictates that salary increases based on how many years a loyal employee has worked for the company. Although those within the system receive more respect, the higher salaries to the older working generation incentivize companies to encourage early retirement.

Government pensions following retirement only amount to $200. According to the National Pension Research Institute Survey, this is just a quarter of what is necessary for single households. In addition, pensions only go to 35% of the elderly population.

Despite the harm that arises from longer working hours, South Korea hit an all-time high in productivity in 2020. Recently, many corporations have shortened working hours so that employees may have a better work-life balance. Millie, a book firm, as well as e-commerce company Cafe24, implemented a four-day work week to reduce worker fatigue. In addition, some airlines and duty-free stores have followed suit. To measure the opinions of the working citizens, surveyors asked 1,164 office workers how a four-day work week would benefit them; half of the participants claimed that fewer hours would result in self-improvement. When the surveyors asked what the office workers would first do with their new free time, 44.5% asserted that they would try a new hobby.

Reducing obstacles to the elderly will immensely bolster the workforce and improve productivity, while actively fighting discrimination and reducing elderly poverty. Among surveyed Koreans aged 40-50, 64.9% believed that reserving more jobs for the elderly would best reduce elderly poverty. The Aged Employment Promotion Act of 2003 aimed incentives at companies to increase the employment of the elderly. Many agree that the proliferation of these policies will alleviate poverty among the aging.