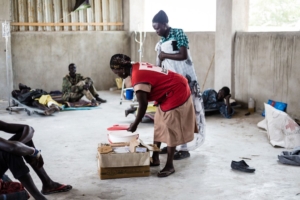 Located in northeastern Africa, Sudan has long been a diverse region of interaction between continental Africa and the Mediterranean. The country is home to hundreds of sub-Saharan African ethnic groups, and political and security challenges in recent decades have impacted it. In addition to displacement, the scattered population has recently suffered several outbreaks of cholera, dengue fever, Rift Valley fever (RVF), chikungunya and malaria.

Healthcare in Sudan faces both unique geographical and financial barriers to access. Improvements in health indicators are difficult to measure since they vary by region. Additionally, efforts to improve healthcare access have met with challenges. These include ineffective implementation of policies and poor coordination between the health and education sectors.

Despite reducing support for healthcare, the Sudanese government also invested in higher medical education around the same time. It opened 30 new medical schools and made Sudan the country with the highest number of medical schools in Africa. This investment was an important step in the sustainable progress of healthcare in Sudan. It ensured a steady increase of healthcare professionals for the growing population of 42 million. Consequently, the physician-to-patient ratio improved from 0.1 per 1,000 people in 1996 to 0.41 per 1,000 people in 2015.

In 1997, in an effort to compensate for reduced government spending on health, the Ministry of Health introduced social health insurance (SHI). By 2017, SHI covered most of the population in Khartoum state and a few others. Despite internal efforts, healthcare in Sudan receives little international support. Compared with 50% of healthcare expenditure in Rwanda, only 5.4% of Sudan’s healthcare expenditure comes from external aid. The Sudanese government spends a comparable amount on healthcare to other sub-Saharan countries. However, the cost of healthcare for Sudanese citizens remains high, and many are uninsured.

Sudan is struggling to retain healthcare workers, many of whom leave the country for better living and working conditions. To reduce physician migration, the Sudanese government has offered various incentives to specialists, such as generous salaries, leading positions, housing, transport and free education for offspring. However, the government cannot afford to sustain these efforts in the long-term or extend these benefits to all physicians.

Michelle Bachelet, a U.N. High Commissioner for Human Rights, argued that sanctions that the U.S. imposed have barred Sudan from receiving international funding for healthcare and COVID-19 relief. Sudan is on the U.S. State Sponsors of Terrorism list, which makes it ineligible to access any of the International Monetary Fund-World Bank’s $50 billion Trust Fund. This fund is currently assisting vulnerable countries to fight COVID-19. Sudan’s health minister Akram Ali Altom has also confirmed that the healthcare system is in urgent need of funding.

As in many African countries, the main challenges to healthcare in Sudan are in rural areas. There, conflict, lack of transport and uneven distribution of resources reduce the availability of healthcare workers. An estimated 70% of the total healthcare providers are in the capital city Khartoum, serving just 20% of the population.

One way that some Sudanese states have addressed the problem has been through the use of telemedicine. Telemedicine has the potential to break down geographical barriers and increase access to high quality, specialist care to patients. A two-year pilot program in Gezira introduced electronic health records into the area for the first time. More than 165,000 new patients were able to register for consultations.

Sudan has many challenges to overcome before telemedicine can become a national success. Consultants located in the Khartoum center were not responsive. Additionally, issues involving software licensing and equipment maintenance have hindered smooth operations. As Salah Mandil, who led the first telemedicine project in Khartoum, noted, poor collaboration between scattered telemedicine projects has hindered efficiency and growth. For instance, projects such as the Surveillance project (FMOH) and the eHealth project have begun independently in various areas. However, they do not communicate or coordinate efforts.

Despite challenges to stability and safety, Sudan has made steps toward improving healthcare access in the past decade. To ensure equal and sustainable healthcare in Sudan, it must address the remaining challenges through better cooperation, management and funding from the government and international aid organizations.