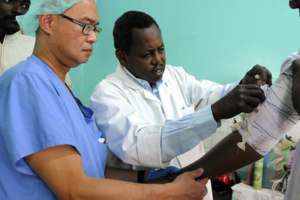 Chad is in the top ten countries for oil production in Africa. However, very little of the revenue of oil sales goes into improving the living conditions and healthcare in Chad. In Chad, it is reported that 66% of the population is living in poverty. The World Bank reported in 2018 that 88% of the Chadian population does not have access to electricity. Additionally, it is estimated that 44% of the population does not have access to clean drinking water. These factors create obstacles for the healthcare system. Here is what you need to know about healthcare in Chad.

Chad has a very low number of healthcare professionals. The World Health Organization reported that there are 3.7 doctors per 100,000 people. This number is well below the global average of 141 doctors per 100,000 people. The number of healthcare professionals remains low in Chad due to the many insecurities the Chadian population faces. Due to ongoing violence, 122,312 people have been internally displaced in Chad. This factor causes an obstacle that inhibits the population from seeking education and training.

Chad spends approximately $30 per capita on healthcare. Spending on healthcare in Chad fell by $14 per capita from 2014 to 2017. The decrease in funding has caused many healthcare facilities to be poorly equipped and unable to pay healthcare workers, leaving the Chadian population with minimal access to medical services.

Maternal health is considered to be a major indicator of the strength of a healthcare system in a country. Currently, in Chad, 80% of births are not attended by a skilled professional, whereas in the United States, only 1% of births are not attended by a skilled professional. This lack of access to maternal health professionals causes Chad to have one of the highest maternal mortality rates in the world. In 2017, the World Health Organization reported the mortality rate in Chad to be 1,140 deaths per 100,000 live births. This number is far higher than neighboring countries such as Sudan and Libya, who have mortality rates of 295 and 72 deaths per 100,000 live births, respectively.

The lack of access to maternal healthcare in Chad is made more severe by many young teenage girls becoming pregnant in Chad. UNICEF reported that 68% of girls below the age of 18 are married and under five percent of these girls have access to contraception. The World Health Organization cites that maternal complications are the leading cause of death in girls aged 15 to 19 years old. Mothers under 18 years old are also more likely to experience systemic infections and neonatal complications. These complications can become fatal to young mothers in Chad due to the lack of access to maternal health services.

Chad experiences some of the highest levels of malnutrition in the world. In the central Chadian town of Borko, almost half of all child deaths are due to malnutrition. Also, 40% of Chadian children experience growth stunting due to a lack of access to food. Chad goes through periods of severe drought causing food insecurity and lack of income for many families. The Alliance for International Medical Action (ALIMA) has set up a hospital in Chad. ALIMA reported that the malnutrition ward is overrun and the organization had to expand malnutrition treatment services to cope with the demand.

The Burden of Diarrheal Disease

Due to the instability in Chad, external organizations are working to improve the living conditions and access to healthcare in Chad. The Bill and Melinda Gates Foundation has partnered with the United Nations to provide immunizations and sanitary facilities to Chadian children. The initiative aims to decrease the mortality rates of diarrheal disease and other communicable diseases such as measles and pneumonia.

The World Food Programme has established the School Meals Program to help decrease childhood malnutrition. The program ensures that all children at elementary school receive a hot meal throughout the school day. The program also encourages families to send their daughters to school by giving girls in grades five and six a ration of oil to take home. The School Meals Program aims to feed 265,000 elementary-aged children.

Healthcare in Chad faces many challenges regarding the high burden of disease, political instability and low availability of healthcare training. With a heavy reliance on outside organizations, the Chadian healthcare system needs to improve to be able to effectively tackle these challenges. Healthcare in Chad requires foreign aid funding to be able to increase access to healthcare and properly train medical professionals. The United States currently spends less that one-percent of its annual budget on foreign aid. With increased funding, the United States government has the power to increase healthcare for the Chadian population.