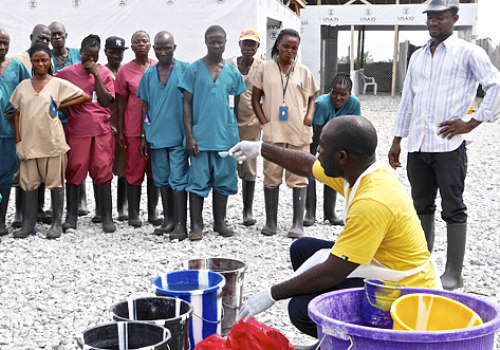 After tending to Ebola patients in West Africa for over a year, health workers have begun returning to their regular jobs. Because of the disease’s decline, a pilot training program to prepare these employees to return to work took place in May 2015 in Liberia.

The training program’s aim was to “refresh important skills but also address weaknesses exposed by the Ebola outbreak,” according to Foday Kanneh, a Ministry of Health training coordinator. Dr. April Baller, head of World Health Organization’s (WHO) clinical management and infection control—along with other prevention teams and Ministry of Health and WHO staff—created the training program. It was a rigorous course designed to “support the restoration and strengthening of the health system which virtually collapsed during the epidemic, while also giving health workers the confidence and capacity to respond in the event that Ebola re-emerges,” said Baller.

Although Ebola is in decline, no one knows when it could return. This disease first appeared in 1976 and did not resurface in human beings between 1977 and 1994. With such erratic exposure, health workers need to be trained for the post-Ebola environment.

Doris Sannoh, a trainee and social worker in Liberia, said that she normally worked in an outreach capacity to prevent HIV and gender-based violence. During the outbreak, she found herself working in the triage area of the hospital, counseling and assisting sick patients. “I never had any infection prevention training as a social worker, but I needed it. As health workers, we all need training like this.”

The training sessions were led by 40 trained facilitators and assisted by Ebola survivors. The survivors role played the parts of patients and critiqued the trainees on the quality of care they administered. In order to ensure that the training acquired during the sessions was used regularly and effectively, on-site mentoring and monitoring was crucial, according to Kanneh. Currently, the Ministry of Health and the WHO are evaluating the course and, if appropriate, will refine it and expand it throughout the country.

According to the WHO, “The West African Ebola outbreak has been the largest, most severe and most complex in human history.” When the outbreak began in March 2014, health workers from all over the world stepped up to work with the WHO to stop the epidemic. It peaked in September 2014 and is now in decline. Guinea, Liberia and Sierra Leone reported a combined total of 27,705 confirmed, probable and suspected cases up to July 19, 2015. Deaths from confirmed as well as probable and suspected cases totaled 11,269.

The good news is that in the week before July 19, Guinea reported only 22 new confirmed cases, and Sierra Leone reported four. This good news gets even better: Liberia has not reported any new cases in the week before July 19. Currently in Liberia, 56 people who have had contact with Ebola patients are under follow-up care. Eighteen have completed the 21-day surveillance period. If no new cases arise, all contacts will complete follow-up by August 2.

Sources: WHO 1, WHO 2, WHO 3
Photo: World Health Organization

Why Menstrual Hygiene Remains a Challenge in Nepal Bolivian Healthcare: Percentages over People
Scroll to top