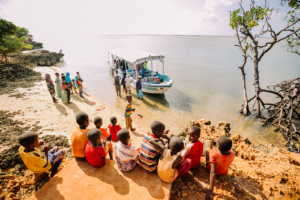 In the coastal waters of Kenya, one leader serves as a role model in creating healthier, safer communities. Umra Omar grew up on Pate Island in Kenya where she returned after attending college in the United States. She envisioned a community where people have access to health care in Kenya and the ability to obtain available life-saving treatments.

Kenya is comprised of a series of coastal islands, which, in conjunction with remote villages spread throughout the country, make it difficult for many Kenyans to access quality health care services.

Kenya’s new constitution, created in 2010, includes an emphasis on improved health care for all Kenyan citizens. Since the implementation of this constitution, the government set new goals, including the achievement of Universal Health Coverage (UHC). This resolution refers to the ability to retain health care services without economic barriers.

Recent objectives include eliminating fees for health institutions and the implementation of the National Health Insurance Fund (NHIF). Although cost remains the largest obstacle to the completion of the program, another suggested problem is the lack of health infrastructure and inadequate health systems.

In order to help tackle some of the existing barriers to health care in Kenya, Omar decided to create Safari Doctors which began providing mobile health care services to communities near Lamu, Kenya in 2015.

The organization features unique forms of transportation, such as boats and created a related program called Safari Vets for the care of animals. Educational services provide training for citizens to become Community Health Workers (CHWs), learn about health and understand the politics of health care in their community.

Omar boasts a long list of awards for her revolutionary work in health care in Kenya, including the “Kenya Person of the Year Award” in 2017 and an “Amujae Leader” in 2021. Safari Doctors received the “SDGs in Action Solidarity Award” in 2020.

As of 2022, Omar decided to make an even bigger difference in terms of improving the well-being of Lamu’s citizens. She is running for governor of Lamu. Lamu consists of a County Government, in which the governor leads, followed by two elected representatives to Parliament for the eastern and western sections of the county as well as 10 wards in the Assembly.

Omar aims to create a health care agenda to help the most vulnerable groups. At 39 years old, she is both young and female, representing a challenge for the governorship race.

If is successful, she would be Lamu’s first female governor. Omar is running as part of the Safina Party against the incumbent, Yasin Twaha. Twaha is a member of the Jubilee Party, according to Reuters. Omar already vows to enact a health audit and focus on the environmental health of Lamu.

As a leader in creating the revolutionary and visionary project, Safari Doctors, Omar now hopes to enact long-lasting change through the political institutions of Kenya. The field of health care in Kenya is changing thanks in part to Omar’s goals, inspiring a new generation of youth toward a healthier future.