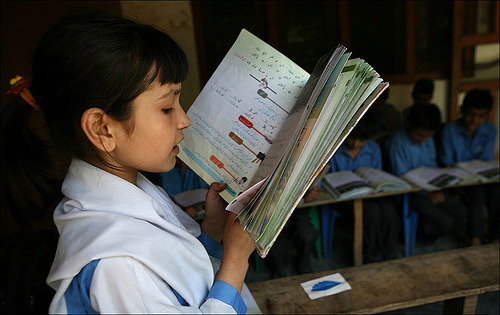 The status of education in Pakistan is a bleak one. Officially, the overall literacy rate is 46%, with 26% of girls being literate. However, third party organizations reduce the overall rate to 26% by excluding people who cannot do more than sign their names. It has the second-highest rate of uneducated children worldwide, with 5.1 million kids out of school in 2010. Two-thirds of the children out of school are girls, giving a ratio of 8 educated girls for every 10 educated boys.

There are merely 40,000 schools in the country that serve girls. Moreover, these schools are concentrated in more heavily populated areas, with more remote girls receiving little access to education. In these regions, half of the girls have never attended school. Furthermore, in many of these rural provinces female education is restricted due to religious reasons. In the provinces of Baluchistan and North-West Frontier, female literacy stands at approximately five percent.

Girls in these areas oftentimes enter the workforce early to support their families and many become domestic workers. Khanzadi, a 10-year-old girl from a rural province who works in a wealthy district in Karachi is “lucky she’s with [a rich household] because [they] can spare some food and help her grow,” her mistress says. However, seeing urban girls her age attend school every day makes Khanzadi feel less than fortunate.

Militant groups, including the Taliban, Al-Qaeda, and foreign groups, have been based in the Federally Administrated Tribal Areas for more than a decade and launch attacks both into Pakistan and neighboring Afghanistan. Since June 2014, more than one million displaced children have been unable to attend school. Hazrat Zaman, a father of 17 who brought his family across the border to Afghanistan to search for schools before returning to Pakistan, said, “We are completely in the dark about our children’s future.”

Several non-governmental organizations (NGOs) have stepped in to improve education access for girls in rural provinces. One organization, Alkhidmat, has set up more than 100 informal schools for girls and women to receive a basic education. The organization operates on the belief that women who are educated will help build a stronger, more developed nation.

Needless to say, there are many long-term impacts on a heavily uneducated population. One in three young Pakistani people, or about 12 million people from the ages of 15 to 24, lack the basic skills necessary to be hired. Men earn, on average, 60% more than women. This income gap is widest among illiterate workers. However, education still makes a huge impact on women’s earnings: educated women earn 95% more money than their uneducated counterparts.