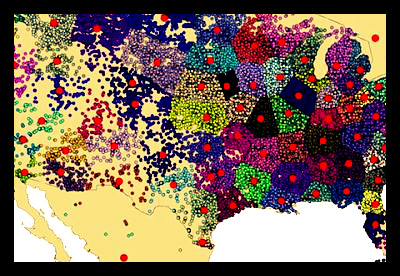 The Global Poverty Mapping Project, run by NASA’s Socioeconomic Data and Applications Center (SEDAC) in collaboration with the Center for International Earth Science Information Network (CIESIN), is an attempt to increase the public’s general understanding of the global distribution of poverty. By creating maps that demonstrate the distribution of impoverished populations as well as the link of poverty to geographic and physical conditions, the project aims to assist policymakers and agencies in developing effective interventions to downsize global poverty.

Depictions of global poverty, either illustrative or written, tend to focus on economic representations based off of a country’s GDP or the percentage of a population that is living on less than a certain amount per day (for example, less than USD $1). Though these figures make the information easily accessible to a wide audience, such figures are not readily available at a sub-national level for many of the world’s countries. As such, the project utilizes five main data sets that were constructed by CIESIN: Unsatisfied Basic Needs, Small Area Estimates of Poverty and Inequality, Poverty and Food Security Case Studies, Global Subnational Prevalence of Child Malnutrition, and Global Subnational Infant Mortality Rates.

The child malnutrition and infant mortality rates are used to generate global and regional maps, while the mapping project synthesizes maps of smaller areas based on poverty and inequality. Each data set incorporates a vast array of variables, and as such, each has its own advantages and disadvantages. Nevertheless, all of the data presented are direct indicators of poverty levels.

All of the maps that have been created by the project are available on their website. They can be searched and sorted by geographic area, data sets involved, and themes – including infrastructure, sustainability, and everything in between. The maps themselves represent a significant step forward in the fight against poverty. Having knowledge of problem areas is the first step in creating policy to combat it. By providing a statistical representation of the specific issues that affect these poverty-stricken areas, the Project has also compiled an invaluable resource for policy makers.

Poverty mapping has since found its place in a wide variety of media. The data has been used to support arguments and demonstrate a need for change in everything from NASA publications to New York Times articles. It has been applied to studies that focus on issues ranging from the dangers faced by small schools in earthquake-prone zones of Pakistan to measuring economic growth based on light production. By synthesizing and condensing the vast amount of data, the efforts of the Global Poverty Mapping Project have proved instrumental in highlighting the need for intervention in the fight against global poverty.