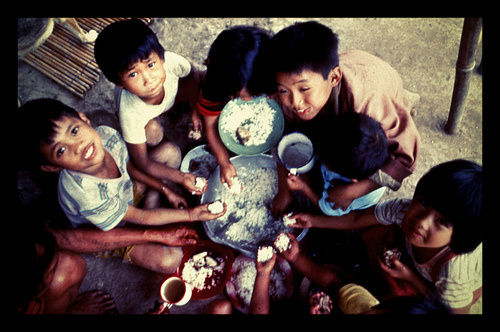 All the talk these days is about global hunger. Under-nourishment. But in focusing solely on that, we completely miss the issue of mal-nourishment. An issue that is becoming all the more relevant as more people are raised out of extreme poverty. Getting enough to eat is one thing, but with nutrition, quality counts nearly as much as quantity.

This facet of global malnutrition is further reaching than that of global hunger. Malnutrition is present in all societies, in developed and undeveloped regions. According to the UN Food and Agricultural Organization (FAO), two billion people worldwide are deficient in essential vitamins and minerals.

The consequences of malnourishment are severe and irreversible. For children who aren’t getting enough nutrients, stunting can do permanent damage to the brain’s ability to develop. Anthony Lake, executive director of UNICEF emphasizes the difference between lacking food versus lacking nutrition:   “The fact is that India, with 48 percent (childhood) stunting, is considered food secure – but that doesn’t mean food is distributed equitably within India.”

Conversely, 1.2 billion are obese. Many of those people live in developed countries where the issue isn’t getting enough to eat, it’s eating healthily. It’s an unfortunate thing that a by-product of readily available cheap foods is that they tend to be unhealthy. Meaning that those who do climb out of extreme poverty and the constant struggle with hunger, end up instead in a situation where the food available to them is cheap and processed and can lead to obesity.

In order to truly break out of a cycle of malnutrition, people need to not only escape extreme poverty, but to reach a point where they can afford to buy more than just the basics. Education also plays a role in this. Understanding and awareness of what’s available and what’s beneficial can go a long way towards improving quality of life. And the knock-on effects of that can be huge. A report by the FAO claims that the combined effects of malnutrition cuts global income by 5% annually due to lost wages, amounting to some $3.5 trillion.

Perhaps a report highlighting this figure will garner some attention for the complex issue of malnourishment. It’s not enough to simply reduce global hunger. The fight doesn’t stop there. That’s only the first step towards a healthier world.