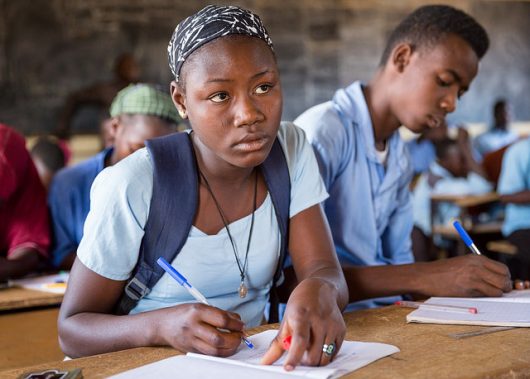 As the least educated country in the world, Niger faces severe issues with its current stability and long-term prosperity as a nation. Even more concerning is the educational disparity that exists between the male and female population. While female primary school participation rests at just over 50 percent, the literacy rate for women between the ages of 15 and 25 is less than 25 percent.

A potential reason for this gap in early enrollment and more comprehensive literacy could be the average length of schooling for a Nigerian citizen, which sits at a troubling 1.5 years.

As UNICEF reports, “in Niger, only one in two girls goes to primary school, one in ten to secondary school and one in fifty to high school.” Without a lasting commitment to education, early schooling is worthless as many will choose to exit the system before they can learn the necessary educational lessons for an effective and prosperous career.

Girls’ education in Niger has an overall void in educational emphasis. If schooling for males is lacking in a country that experiences gender inequality, as is true in Niger, then there is little hope that female education will be any better. Even when schooling is available, family dynamics and responsibility can serve as barriers for young women being able to attend class.

As a whole, males tend to have greater opportunities to pursue education as many household chores and family finances fall on the girls. Ten-year-old Choukouria from Niger explains, “my mother has six children: three boys and three girls. My brothers are allowed to go to school, but I am not allowed because I need to take care of the daily chores, take care of my little sisters and also contribute to my family’s expenses.”

Stories like this are commonplace for young females which makes girls’ education in Niger a constant struggle.

Another obstacle facing improvement in girls’ education in Niger is exceptionally high birth rates across the country. On average, women in Niger have 7.6 children over the course of their lives, with most births happening at a young age.

Teenage motherhood not only places social, financial and physical stress on women, but it also reduces any chance they have of receiving an education. In addition, as citizens of one of the poorest nations on earth, women in Niger do not have the extra capital necessary for child services even if they did want to pursue educational opportunities.

As a whole, girls’ education in Niger is severely lacking. Both poverty and a combination of young motherhood and high birth rates affect female access to educational resources and opportunities. An overall lack of commitment to education in Niger affects both males and females, but it appears that women have very little power in their own schooling experience.

It is young girls who are tasked with family responsibility and finances, which leaves them with very little chance in continuing their education later on.

Among these many adversities, there is still potential in creating a new atmosphere surrounding education throughout Sierra Leone, especially for girls and young women. USAID is currently working to promote a larger reading culture in the country by involving the community in education and its functioning.

In addition, UNESCO also commits itself to transforming education in Niger through their project titled “Tackling Gender Inequalities in Niger’s Educational System.”

While these projects do exist, their recent implementation means that apparent success will take time to develop. International aid and redevelopment plans, which include education as primary aspects, are also beginning to enter Niger but have not yet taken a firm hold.

As can be seen via U.N. statistics, Niger sits at the bottom of economic and educational rankings for a reason. The nation is in an era of hardship and it will require greater help from international groups and foreign countries to remove itself from future difficulties or disasters.