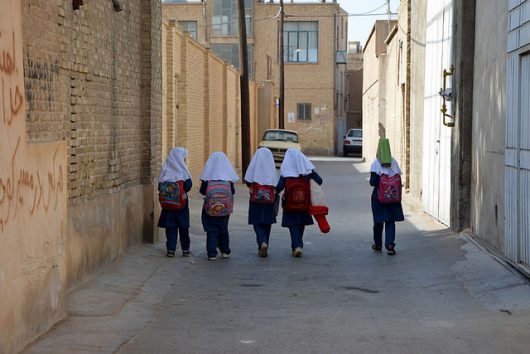 In recent years, girls’ education in Iran has fallen victim to many restrictions and limitations. While Iran was one of the first countries in the Middle East to allow women to study at the university level, many things have changed since the violence of the Iraq war and other related conflicts. Many Iranian politicians in the years after 9/11 have viewed girls’ education in Iran in a different light, often as a threat to political power.

Repression for Girls’ Education in Iran

The presidency of Mahmoud Ahmadinejad from 2005 to 2013 ushered in an era of repression for girls’ education in Iran. Before his election, women accounted for more applications to universities than men in Iran. During Ahmadinejad’s presidency, however, many restrictions were introduced to girls education including separate entrances and classrooms, as well as separate social areas and a repression of the subjects women were allowed to study.

This trend represents what many politicians labeled a return to more traditional Islamic values and a “re-Islamisation” of the Iranian people. This call for change from political leaders placed an emphasis on reducing Western influence on Iranian culture and many of these reductions were felt by the female population in Iran. Conservative government officials made it known that they felt the education of women was leading to a diminishment of family values and desire for women to bear children and perform familial duties.

To promote this view, President Ahmadinejad’s administration primarily linked girls’ education in Iran to an increasing divorce rate and decreasing fertility rate. In addition to linking these factors, the administration promoted gender-based admission policies through the Iranian ministry of science, which selects who leads universities in Iran.

Change in Admissions and Leadership

In August 2012, Mehr news agency reported that women were being prevented from admissions in 77 majors, 36 universities and in important areas such as accounting, education, chemistry, engineering and advising in Iran. Many of the majors reserved for men included engineering, surveying, management and leadership positions.

While the fight for girls’ education in Iran will undoubtedly be better received by the Rouhani administration, it is still an upwards battle for the women in Iran to see educational improvements in their lives.  Even though girls’ education in Iran has largely been accepted and promoted since the turn of the twentieth century, in recent years many people have called for a return to a more traditional Islamic model of women having more familial duties in the home.

It is the hope of many people that Iran allows its women to gain the educational opportunities they want and deserve. With a presidential administration amenable to equal education for women, Iranian women may gain equal access to education soon.