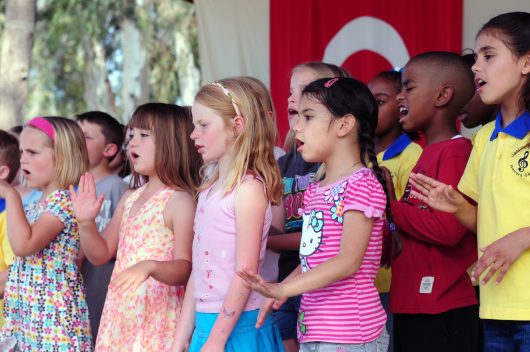 Turkey has long boasted a prominent geographic position between Europe and Asia. It has been an important site for the exchange of goods and ideas for centuries. Its long history along major trade routes has created a unique culture that values expression and religion. Education has long suffered in this region but recent efforts have proven valuable in improving access to education, specifically girls’ access to education in Turkey. In order to understand how the country is handling inequalities, it is important to evaluate its education system as a whole.

Turkey’s education system is monitored and regulated by the state. Its structure is very similar to the United State’s system, with an optional preschool enrollment before primary school (lasting four years), then a middle school level (another four years). The secondary portion of the education system has not always been mandatory, but since 2012, students have been required to complete schooling up through grade 12.

The overwhelmingly young population of the country continues to put pressure on education systems. One of the primary pressures facing the system is seeking out equal opportunities for Turkish students. Primary education and secondary education are the foundation for opportunity. With increases in access to education, students are graduating from the primary and secondary school systems and increasingly seeking higher education both at home and abroad.

Turkey is home to 166 universities and this number could be growing. Turkish universities have been enrolling refugees as well as attracting international students from countries in Europe and the Middle East.  There is an active effort to recruit international students to engage with the Turkish higher education system. Students have also been outgoing, seeking opportunities in the U.S., Germany and Canada. As Turkey has a relatively high unemployment rate for university graduates, foreign markets become increasingly appealing for ambitious students.

How Opportunity is Still Lacking

At the start of the twenty-first century, Turkey addressed its weaknesses with education through the Basic Education Programme. This encouraged enrollment and made at least eight years of education mandatory, which has since been increased to 12. Girls’ access to education benefitted the most from this strong regulation and standardization from the state. Enrollment rates increased and literacy improved, thus gender gaps in access to education are diminishing significantly.

The rural-urban divide tends to be a strong indicator of access to education. The Southeast portion of the country experiences a rate of illiteracy over 30 percent. The Ministry of Education (MONE) recognizes these disadvantages for rural and impoverished youth and has created programs and channels through which to increase access to education for disadvantaged youths.

One of MONE’s programs is the creation of 13 boarding schools, 11 of which were designed for young girls. By increasing access to school supplies, food, safe transportation and technology, MONE has assisted in narrowing the gap between urban and rural access.

Another organization addressing girls’ access to education in Turkey is Hey Girls, Let’s Go To School, a grassroots campaign powered by volunteers working in rural areas going door-to-door lobbying families on behalf of young women’s education. These volunteers talk with skeptical family members and are effective in addressing cultural concerns that weigh on the hearts and minds of the girls’ caretakers. Since the start of the program in 2003, the group has been successful in enrolling 20,000 young girls in the education system.

Girls of Hope is a documentary that highlights the challenges of girls’ access to education in Turkey. The lack of adequate resources and safe venues for education are one of the obstacles addressed in the film. Cultural standards and practices are further challenges for girls that most often prevent them from accessing education.

Turkey is aware of the shortcomings of its education system and has taken meaningful steps to improve access for all. Organizations focused on girls’ access to education in Turkey have helped the country progress and will continue to narrow the education gap between young boys and girls in the country.