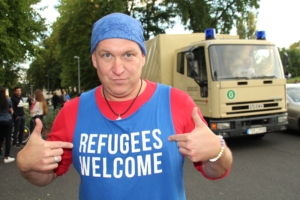 Germany has gained worldwide acclaim for its joint education and vocational training programs. There are tens of thousands of asylum-seekers participating throughout the country, which signals concerted government effort to create a path to employment.

What is Germany’s Dual System?

Germany’s vocational education and training (VET) programs combine practical and theoretical training with real-life work experience. Those enrolled typically spend part of the week in vocational schools and the rest work directly at specific German companies. After two to three years, certification and sufficient language preparedness all but guarantees job placement, which is critical in the refugee integration effort.

After the influx of refugees in 2015, Germany’s dual system has become an essential part of the country’s integration strategy. The number of refugees entering tradecraft apprenticeships, both through vocational school and otherwise, increased 140% during 2018. Given the success of these vocational schools, many other European countries such as Austria, Switzerland, Luxembourg and Denmark have adopted similar frameworks.

Syrian refugees and asylum seekers in particular benefit from Germany’s undertakings. Of the more than 1.4 million asylum applicants, the majority come from Syria.

Enrollment in a government-sponsored language program is necessary for participation in the dual system. While this may seem like a barrier to integration at first glance, asylum-seeker status guarantees the right to attend subsidized language courses.

These social measures are helping to lower barriers to employment for Syrian refugees. Germany’s dual system has positive social and economic outcomes in its own right, but it’s just one part of an ongoing, historic effort by many actors throughout the country. Participation in language courses and vocational training doesn’t guarantee quick integration into society for all, but it is a step in the right direction.

Thanks in part to this system, half of all refugees living in Germany will find steady employment within five years of arrival. The influx of asylum seekers, which initially caused much concern, has had an overwhelmingly positive impact on the German economy. More importantly, the opportunity to study German and find employment has improved the lives of Syrian asylum seekers.

As the most important aspect of integration, employment reduces feelings of alienation and creates a brighter path for Syrian families. By giving refugees the chance to immerse themselves in the language and culture as well as enter the workforce, Germany makes escaping poverty a reality for many.

U.N. Supports Aid for Women and Girls An Overview of Healthcare in Kosovo
Scroll to top