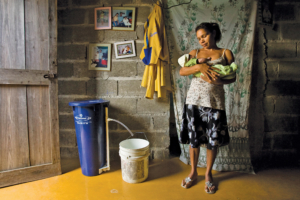 Although by SDG’s empirical data, the Dominican Republic is a progressive country when it comes to gender equality, there are still many cultural norms that keep women being truly equal to the opposite gender. The country has a high rate of violence against girls and women, as well as a high rate of maternal mortality and teen pregnancy. It took until January 2010 for the Dominican Republic to amend its constitution to make it more inclusive and favorable for women. This includes Article 39, which condemns domestic and gender-based violence. Perhaps the most iconic and historic act of gender-based violence occurred when the Mirabal Sisters were murdered under the orders of Trujillo because of their public dissent against the dictator.

Another problem plaguing the women in Quisqueya is sex trafficking. According to a 2019 report from the U.S. Department of State, while the Dominican Republic is making significant efforts to eliminate sex trafficking, it does not meet the minimum standard to eradicate sex trafficking. Like in many other areas of governing, the country has shown effort and improvement but not enough to make significant headway. The efforts included convicting more traffickers and doling out more severe penalties to traffickers, enacting a national action plan and increasing the effort to combat labor trafficking. However, the government did not meet these standards in some areas, such as investigating and prosecuting and then issuing inadequate sentences to those of convicted. Not only did the Dominican government fail at prosecuting the criminals, but it also failed the victims of trafficking. The government did not offer enough specialized services to assist the victims.

While the Dominican government itself is failing its women, foreign organizations are attempting to combat domestic violence and sex trafficking. The United Nation’s Women charter (UN Women) has worked to mainstream gender in national planning and policymaking by providing assistance, support and advice to the Dominican government. They have been developing strategies and instruments to interject gender in plans, programming and projects in all levels of government. UN Women also plans on closing gender gaps in social protection and security. Together with the United Nations Development Programme, International Labour Organization, UN Women has contributed to and promoted investigation and analysis into the social protection of women. The purpose of gender protection is to overcome social inequalities. It also promotes gender equality and women’s rights through advocacy campaigns which include the Beijing+20 platform and HeForShe, hosting workshops with civil society organizations, distributing information through social media and national events. UN Women established their training center in the Dominican Republic where it offers high-quality training for gender equality by offering courses, tools and services on topics like gender-based violence, the care economy and masculinity.

The United States Department of State has recommended various ways to combat sex trafficking. The State Department recommends that the government convict traffickers indiscriminately including government officials, fully fund, and implement a new national action plan. They also need to provide adequate support, resources and training to combat trafficking, especially in areas outside of Santo Domingo. The Department of State recommends implementing protocols to identify adult and child trafficking victims and get them protective services. It suggests that the Dominican government amend the 2003 anti-trafficking law so that proving force, fraud and coercion in victims under the age of 18 are no longer required; thus joining the international stage when it comes to sex trafficking.

With so many members of the international community offering aid and advice on how to combat sex trafficking, it will be interesting to see of the new PRM administration under President Luis Abinader will continue to reject assistance or finally embrace it.