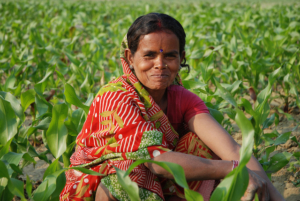 Women are disproportionately affected by malnutrition in developing countries, and as such it is now the focus on many global food programs to simultaneously improve gender equality and nutrition by providing better education and resources for female small farm holders.

Sociocultural norms have placed many women in secondary decision-making roles in their families. Women are less likely to receive any education on general health and nutrition, less empowered in financial decision-making within their families and less able to control what food they put on the table. Oftentimes, the main breadwinner in a family is male, while women are reduced to more supporting and complacent roles.

Additionally, many programs are male-centric, neglecting the specific nutritional needs of women. As a result, women in developing countries have more iron deficiencies and have higher rates of being an unhealthy weight (obese or underweight). When women suffer from more chronic illnesses, it further reduces their ability to contribute meaningfully, and they further relinquish control on financial decisions. Gender equality and nutrition both improve when women are the focus of food security initiatives.

Antonelle D’Aprile, the country director for the World Food Programme in Nicaragua, is a leader in combining gender equality and nutrition into a cohesive program that truly empowers women farmers. The WFP Women Economic Empowerment Strategy was first implemented in 2016 and has helped 300 female farmers reach higher financial independence and economic development.

The strategy ensures that women are the decision-makers by providing them with proper agricultural training and access to agricultural equipment that optimizes their crop yields. There are courses for women to improve their financial education and business planning skills so that they can begin growing above the sustenance level and sell excess crops for income. This program to improve gender equality and nutrition also focuses on a man’s role in sharing domestic chores with women and supporting the economic development of their wives. It has been so successful, officials in El Salvador, Guatemala and Peru are replicating the program in their own countries.

The Role of the Private Sector in Gender Equality and Nutrition

While nongovernmental organizations (NGOs) are the backbone of nutrition-improvement programs, private sector companies are also necessary if female farmers are to reach their true potential. CARE has partnered with the PepsiCo Foundation to implement one of the largest gender equality and nutrition programs in the world called “She Feeds the World.”

With the help of the PepsiCo Foundation, CARE has initiated several projects throughout the world, such as one in Peru, which teaches women how to test soil quality to optimize crop yield. Other initiatives to improve gender equality and nutrition, focus on teaching women to more efficiently use natural resources like water, seeds and natural fertilizer. With this boosted production, these female farmers have enough extra income to send their children to school, feed their family nutritious meals, expand their business, employ others and make substantial savings.

Private sector companies are also very important in terms of collecting data and analyzing information to improve gender equality and nutrition. It is very difficult to measure an abstract concept like “decision-making power,” but private sector companies have the financing, personnel and expertise to collect adequate data so that resources are making the largest impact.

Empowering women is the key to improving nutrition for everyone. According to studies, the relationship between gender equality and nutrition is strong. Giving women equal access to basic resources and services could increase yields on female-owned farms by 20-30 percent. This would translate to an increased agricultural output of 2.5-4 percent in developing countries.

A 20-30 percent increase in agricultural output on female-owned farms would lift 150 million people out of poverty.

Women are the backbone of many developing countries. In Sierra Leone, an initiative has focused on empowering grandmothers to be the champions of improved nutrition practices in families. As very respected members of their families, they are teaching and cultivating healthy habits in infants and young children, an approach which has already seen success.

Female small farm holders are central to improving nutrition security in developing nations. World food initiatives are ensuring that women are not left behind – in fact, they are making sure that women lead the fight to improve gender equality and nutrition around the world.

5 NGOs Aiming to End Poverty and Hunger Women in Tech: How Tech4Girls is Closing Gender Gap
Scroll to top