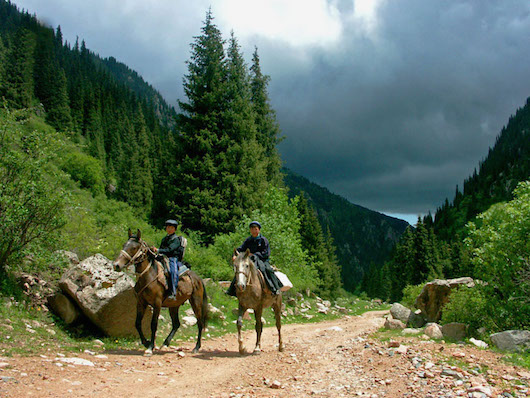 In the Kyrgyz Republic, an Asian country along the Silk Road, 41 percent of the population relies on the forest for fuel, food and other products. Small communities that depend on the forest are especially vulnerable to mismanaged forests and poverty. The World Bank is partnering with the Kyrgyz Republic to develop a sustainable strategy for managing a major resource for the country and its rural populations.

A study by the Food and Agriculture Organization of the UN (FAO) reported the Kyrgyz Republic as an ecologically rich country. The total forested area in the Kyrgyz Republic is more than 1.1 million hectares, approximately five percent of the country.

The forests are highly diverse and include spruce, walnut-fruit, juniper and riverside forests. In addition to timber and fuel, the forests provide nuts, fruits, mushrooms and other edible plants for communities. Forest products also provide food security during tough economic and agricultural times.

Beginning in 2016, The Integrated Forest Ecosystem Management Project (IFEMP) will be implemented in partnership with the Kyrgyz Republic over five years. The World Bank is financing $16 million for the project, which targets forest management at the national and leskhoz level. The leskhozes are state forest farms or agencies managing at the local level.

In a press release, the World Bank said the IFEMP’s main objectives will be accomplished “through investments in management planning, ecosystem restoration and infrastructure.” Improved data collection and distribution is an important aspect of IFEMP. The project will update the National Forest Inventory and increase access to the information at all levels. Ultimately it is estimated IFEMP will improve the management of one-tenth of Kyrgyz forests and introduce sustainable forest management to almost half of all the forests.

According to the FAO study, “forests are potentially valuable to rural people as a means of income generation and, thus, poverty reduction.” Recent efforts focusing on sustainable forest management strategies aim to better serve both the environment and those in poverty.

In the World Bank’s press release, Jean-Michel Happi, World Bank Country Manager in the Kyrgyz Republic, said, “We are pleased to support the project that will contribute to improving the lives of rural people by protecting and improving the natural resource base of forests and pastures on which the livelihoods and communities are dependent.”

Learning to Read in TongaUN: New Efforts to Reduce Climate Change and Poverty
Scroll to top