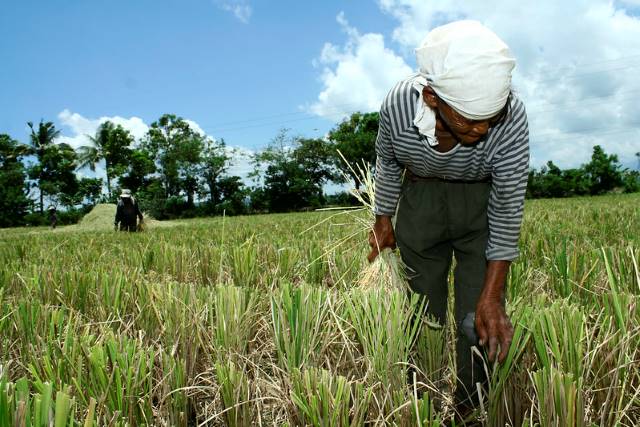 Climate change brings with it an increased frequency of floods and droughts, which rice is especially vulnerable to. Sustainable Crop Production Research for International Development (SCPRID) sent an international resilient rice team to rain-dependent agricultural areas of India to introduce new strains of rice to help subsistence farmers maintain or increase their yields. To create these new strains, SCPRID bred wild ancestor plants with currently available rice plants to create a strain that is more tolerant to harsh weather conditions.

Another issue rice growers face is salt inundation since rice is an extremely salt-sensitive crop. Two historic disasters, the 2004 Indian Ocean tsunami and Japan’s 2011 tsunami flooded more than 65,000 hectares of cropland in multiple surrounding countries. Land flooded with salt water may be usable again after a year or two once sufficient rain has washed the salt away, but the immediate impacts of the salt inundation seriously threaten the food security of households in affected areas.

As a salt-sensitive crop, salinity greatly impacts rice yields. In the last few decades, plant breeders have “introduced salt tolerance” into modern rice varieties. This is achieved by introducing the genes of traditional rice varieties that often grow in saline regions to create a hybrid, more resilient rice. For example, the International Rice Research Institute (IRRI) in the Philippines led a collaboration that discovered a gene called Saltol in the Pokkali rice breed. Saltol gives plants a higher salt tolerance. A strain of rice made resilient by the Saltol gene can survive in higher-salinity environments, preventing large crop losses.

The increase in world food supply between 1961 and 2011 came mostly from Asia, with the supply of all staple foods increasing multifold on the continent. Production particularly shot up in the 1980s. However, Asia’s 48 countries still house about 66% of the global undernourished population.

Reducing the high undernourishment rate will require significant amounts of extra food. The continent’s increasing urban population, along with “the growing disposable income” of some, will also heighten the demand for food. Furthermore, Asia’s total population is predicted to expand to 5.16 billion by 2050, an increase of 779 million people, heightening the food demand even further.

Due to a higher demand for housing and other infrastructure projects, “the amount of natural resources available for agriculture has been declining.” The quality of these resources is also lowering as a result of human activity. If left unaddressed, the shortage of quality natural resources will lead to decreased food quality and yields.

Resilient rice strains that can better stand up to high salinity, droughts and floods will help improve food security in Asia. By making the crop hardier, plant breeders can guarantee that fewer rice crops will be ruined by natural disasters and extreme climates. More yields mean increased food security in the region. Resilient rice could help reduce the rate of undernourishment in Asia by ensuring the food supply keeps up with the growing population.