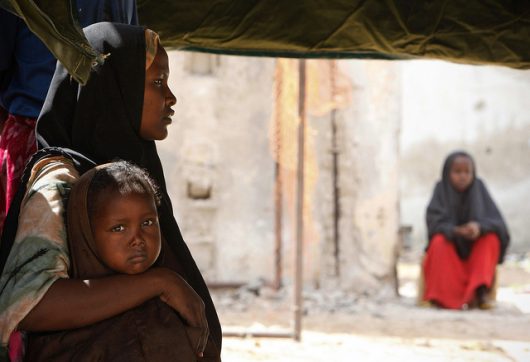 A food crisis in Somalia has its citizens on the brink of another famine. Waiting on international or government aid is a slow process, so Somalis are turning to each other for support. “Combining 21st-century social media with the age-old clan network, the bedrock of Somali society as well as its safety net,” as Ben Quinn from the Guardian puts it, communities of Somalis around the world are using WhatsApp to sponsor families affected by food insecurity.

Humanitarian organizations like the U.N. have warned that 6.2 million Somalis are on the verge of famine, but foreign aid has been slow coming. Saad Ali Shire, the foreign minister of the Republic of Somaliland, says that Somalia needs immediate aid in the form of life-saving supplies in the next two to three weeks to avoid a declared famine.

Aid organizations are trying to prevent a repeat of the famine that killed 260,000 Somalis between 2010 and 2012. Britain’s Department for International Development gave £100 million to Somalia, but the money only covers a small fraction of the need.

With the response to the food crisis in Somalia lagging, networks around the world are turning to social media to support people in need of life-saving aid. Users of WhatsApp are forming groups and pooling their resources to sponsor Somali families. The groups figure out how much aid they can provide based on the formula that says families can survive on $60 per month.

The group then deposits money into a Dahabshiil bank account. Dahabshiil is an African international funds transfer company that started in 1970. The company was initially set up so that migrants from countries in East Africa could send money back to their family and friends still living there. Dahabshiil now allows groups like the Somali clans to transfer funds during crises in addition to offering banking services to the World Bank, Oxfam, the U.N. and Save the Children.

After WhatsApp groups deposit money into a Dahabshiil account, they nominate a five-person committee to withdraw the money and buy supplies for families — usually powdered milk, rice and water.

The network is growing every day, and members are primarily of the Somali diaspora. Forty-five thousand people in Canada identify their ethnic origin as Somali, and tens of thousands of people in Minnesota are also a part of the Somali network addressing the food crisis in Somalia.

The WhatsApp network is a tremendous start, but some smaller Somali groups are struggling to provide aid of their own resources and are turning to aid agencies for financial support. While prominent humanitarian organizations are doing their best to give aid, the process is slow-moving in a time of urgent need.