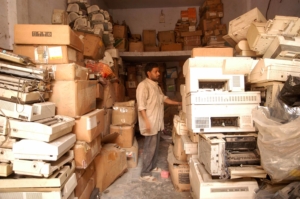 E-waste is a general term for discarded electronic components that contains everything from cell phones to disk drives. It is causing a crisis in the developing world. Only 12.5% are recycled worldwide. E-waste is different from other forms of trash because electronic waste contains toxic metals like lead and cadmium leach into groundwater sources if not properly managed. This is common in developing countries, where nations simply do not have the resources to properly limit water and air pollution. It is time to fix the e-waste problem.

The processing of e-waste is difficult because of the many elements in computer chips and other techs. Paper, a major component of traditional solid waste, is recycled 64.7% of the time because the methods to get the paperback are just that much easier. The United Nations claims that 10-40% of the total e-waste from America goes abroad to countries in Asia. In addition, as little as 0.13% of all waste properly disposed of there. India is starting to make its own e-waste with the growth of the middle class. This leads to many unseemly sights in places like Taiwan, China and Pakistan.

One PBS reporter’s finding of a large lot stacked 5m high – just with printers. Workers, who are women and children, use unsafe and known to be carcinogenic chemicals like sulfuric acid to dissolve the plastic in the printers. People do get gold and silver out of this process. However, this comes at great cost to themselves and their communities, as breaking down this waste contributes to pollution. WHO estimates that one in four people die worldwide due to complications with contamination. Additionally, the way we manage e-waste certainly is not helping.

What Can We Do With Our Used Electronics?

The problem seems overwhelming and hard to solve. However, many companies and NGOs alike are tackling the issue. After e-waste is managed correctly, it has the potential to make or save money. There are three main ways to improve the health of people in Asia with respect to discarded electronics, and in the following order:

Solving large problems like fixing the e-waste problem may seem daunting. If we think creatively, we can make the world a better place by encouraging our countries to make smart and informed decisions about how to responsibly manage hazardous materials from used electronics.