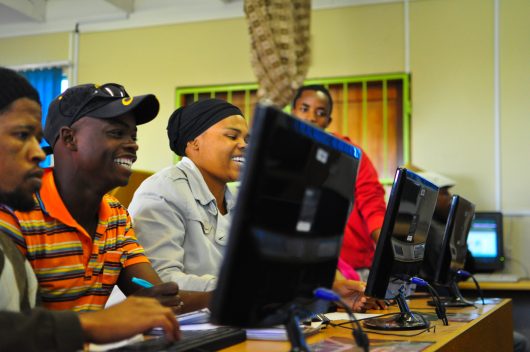 Financial technology, or fintech, refers to innovations aimed at new ways of delivering financial services. With the goal of changing lives, fintech startups in Africa are moving people forward on a digital route. Fortunately, such firms have no lack of funding.

According to a recent report from Disrupt Africa, the overall funding from venture capitalists jumped by 51 percent to $195 million from 2016 to 2017, with fintech funding accounting for one-third of the funds. The regions that were considered as the top three investment destinations were South Africa, Nigeria and Kenya.

Over the past several months, the African tech scene has trended in a positive direction as consumers turn to more digitally driven services in the region. After the success of MPesa in Kenya, many fintech startups in Africa are aiming to bridge the digital gap across other unreached communities in the region.

Here are three leading fintech startups in Africa that are rethinking ways to digitalize communities in Africa.

Flutterwave was founded in 2016 and provides payment technologies and infrastructure to the continent’s largest financial institutions. With the aim of disrupting the traditional banking style in Africa, its instant rise captures the current tech scene of Africa.

The company currently operates in more than 36 countries and has partnered with 10 bank partners in Africa. With as much as 34 percent of adults in sub-Saharan Africa with bank accounts, Flutterwave has a practically untapped market to reach.
Founded by ex-bankers, entrepreneurs and engineers, the technology aims to make banking simple for its customers. With 10 million transactions processed, Flutterwave has processed $1.2 billion in payments and receives the backing from venture capitalists like Y-Combinator, Ventures and Social Capital. The company provides solutions for banks, enterprise and entrepreneurs, with no upfront, annual or special project fees.

According to a World Bank report, roughly $20 billion a year is sent to Nigeria alone, and foreign remittances made up the second-largest source of foreign exchange receipts in Africa’s biggest economy after oil revenues. Flutterwave aims to target the digital payment gap, enabling users to transfer money into different bank accounts. Such fintech initiatives will allow the communities and families in Africa to receive digital payments from family members and business relatives from across countries and, in turn, will spur growth in the developing region.

Launched in Kenya, Pezesha aims to become Africa’s largest peer to business microlending marketplace by including Africa’s low-income borrowers in the financial system. As one of the leading fintech startups in Africa, Pezesha is driven by the core values of integrity, security, reliability, excellence in teamwork, accountability, responsibility and innovation.

Instant loans can be availed by borrowers on the peer-to-peer lending platform via SMS, provided the minimum criteria is met. Such services allow low-income borrowers in Africa to generate credit scores using data analytics. Pezesha also extends funding for small and medium enterprises (SMEs), which could indirectly benefit jobs and employment in the small business sector.

SMEs create 80 percent of the region’s employment and fuel demand for new goods and services. But according to The World Bank, an estimated 50 percent of SMEs have no credit access and are less likely to secure loans when compared to larger firms. By providing microcredit access, small businesses will get funding support and allow entrepreneurs to design bankable projects.

Pezesha was recently selected to participate in the BlackBox Connect 20 accelerator programme, powered by sponsors like Google, IBM, Stripe and Silicon Valley Bank.

Riby has become one of the best 50 emerging fintech startups in the world, according to the recent annual Fintech 100 report by KPMG and H2 Ventures. Based in Nigeria, Riby offers a mobile app-based service for a range of financial management features including the digitization of collaborative saving, lending and investments.

Riby acts as a platform for groups, employees, individuals, associations and financial development institutions and remotely helps them controls their financial activities.

The app includes features like personal savings, cooperative savings and loan management, peer-to-peer lending, agent management and personal and group investment management. Through the digitization of collaborative saving, lending and investments, Riby aims to increase financial literacy amongst individual members of the groups.

A major reason for the fintech rise is the usage of mobile phones in Africa, which has increased from five percent in 2003 to 73 percent in 2014. With 650 million mobile phone owners in the continent (more than in the U.S. and Europe combined), the 3G mobile network is also growing rapidly.

According to Disrupt Africa, more than 300 fintech startups are active across the African continent. It is evident that fintech startups in Africa are attracting the attention of banks and investors, but more importantly, they are helping the lives of many unbanked customers in Africa and indirectly improving the economic condition of the country.

For the African economy, the tech wave has just started. The untapped market could provide a wealth of opportunities for many fintech startups, equipping customers with more sophisticated digital tools.