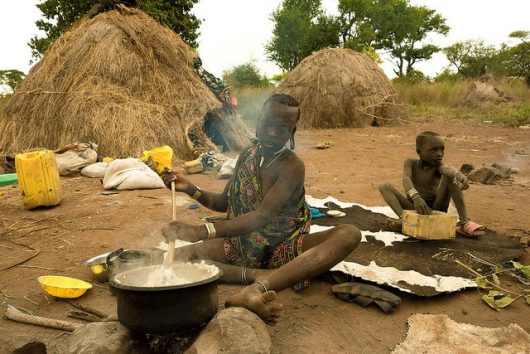 One of the goals in the 2015 Millennium Development Goals was to eradicate hunger and poverty. New technologies and programs are currently being developed to achieve this global challenge. One important focus of such innovations is to fight poverty by improving cooking.

A shortage of fuel and the use of biomass and kerosene for cooking both cause many health issues in Africa, such as physical ailments from collecting firewood, burns and respiratory problems due to the inhalation of deadly smoke fumes. In order to feed their families, African women in poor communities face life-threatening attacks and rape.

Furthermore, in some places where local firewood sources have been completely used up, women have to resort to digging up tree roots or travel increasingly further away from their homes in order to find firewood. The practice of cooking with wood fuel contributes to poverty in Africa by taking up time and resources families could be using to buy food and generate income. Fortunately, new technologies in Africa are making the process of cooking cleaner and more efficient.

One example is the fuel-efficient woodstove created by the global innovating charity, Practical Action. The woodstoves are easy to use, affordable and require less wood fuel. Their high sides allow for improved heat transfer. Best of all, they can be made with clay and bricks that are readily available in local communities. Practical Action has also trained more than 150 women to use its new stoves as well as to practice fuel saving methods, like using dry wood, pre-soaking beans prior to cooking, using a weighted lid and regulating the air supply to the fire.

Another initiative that is helping to fight poverty by improving cooking is the SCORE (Stove for Cooking, Refrigeration and Electricity) project. Also supported by Practical Action, the stove was funded by the Engineering and Physical Sciences Research Council and created under the collaboration of the University of Nottingham, City University, the University of Manchester and Queen Mary and the University of London.

SCORE is a smokeless cooking stove with a generator powered by burning different kinds of biomass like wood and animal dung. It converts the generated heat to acoustical energy and then to electricity, allowing for even the waste heat to be utilized when cooking. The SCORE project aims to halve the household fuel consumption and to use local, low-cost materials as much as possible.

Other innovative efforts to fight poverty by improving cooking include introducing new construction materials, improving designs for basic cooking stoves and intermediate rocket stoves as well as enabling for more customization in design. Such efforts are led by multistakeholder initiatives such as EnDev and ProBEC, national cookstove programs as well as NGOs like GERES in Africa and Southeast Asia and HELPS in Central America.

However, reducing the combustion of solid cooking fuels, in general, is important to the health of the poor. Burning fuels like charcoal, wood and coal produce significant emissions of hazardous air pollutants (HAP) that have potential carcinogenic and other harmful effects. According to a recent World Health Organization study, HAP emissions contributed to 4.3 million premature deaths in 2012 and more than 110 million years lost due to ill-health disability or early death in 2010.

Forced draft and natural draft gasifier stoves are a promising technological solution. Their side-loaded design significantly decreases emissions without requiring the user to prepare or refill the fuel. While advanced biomass stoves are still at a very early stage for commercialization and field testing, they have the greatest potential to improve cooking health conditions.

BioLite’s patented Direct Conduction Thermoelectric System, the HomeStove, is a great example of this. Not only does it autonomously power an internal fan, but it also generates extra electricity to charge LED lights and mobile phones.

As for the renewable fuel sector, cookstoves are still in embryonic stages. They also typically remain expensive. One promising biogas digester model is that of SimGas Tanzania. It is small and custom designed for East African farmers to use by feeding in manure as its power source.

These improved cookstoves, from the cheaper ones produced by artisan collectives like GEREs and EnDev to the high-tech ones manufactured on the global mass scale, face several common challenges. The growing cost of materials and labor make it difficult for such producers to make cookstoves that the poor would be able to afford as well as to transport cookstoves where the poor would have access to them. This makes quality control and, in turn, safety additional issues. Lastly, they also lack access to capital markets.

While many improvements have been made to fight poverty by improving cooking in Africa, much still needs to be done in making improved cookstoves available to the poor.