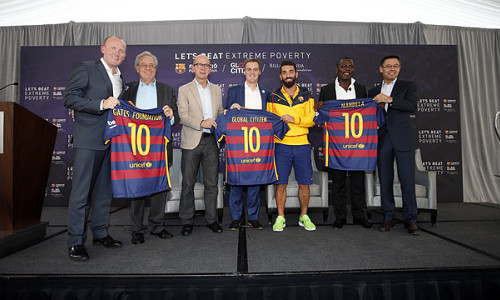 Although athletics are intended to be competitive, they have a unique way of bringing people together; a shared love for that game or passion for a team unites people across the globe. The most universally uniting sport, however, must be soccer.

Almost every kid ever participated in peewee soccer – remember the oranges at halftime? The game is played all over the world, professionally, collegiately and friendly. The international phenomenon is a simple concept (kick ball, score goal), perhaps one of the main reasons for its timeless universal success.

Soccer is global, and as one of the greatest teams in professional soccer, F.C. Barcelona is globally recognized for its international fan base and crazy-talented players, like Lionel Messi. Barcelona, however, is not solely praised for its talent on the field. The team is also receiving well-deserved credit for its efforts to end global poverty.

The F.C. Barcelona Foundation was founded in 1994 and gives Barcelona the opportunity to give back globally. All projects developed by the organization are centered on sports and promote quality education and positive values. The efforts of the organization benefit children and adolescents of Catalonia and the world.

These three major powerhouses will surely make a profound difference in many lives and raise awareness about the realities of poverty. The partnership will work in alignment with the United Nations Development Goals to eradicate poverty by 2030.

Sports have the unique ability to unite people from all walks of life. Mix that with advocacy and activism – a real game-changer. Together, Barcelona, Global Citizen and The Bill & Melinda Gates Foundation unite to change the world and encourage others to play hard against poverty.