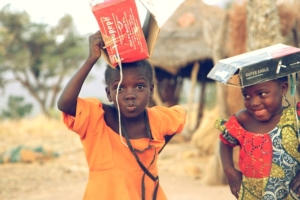 Farming in Nigeria makes up a significant part of the Nigerian economy with agriculture accounting for more than 20% of the country’s gross domestic product. However, even with the large number of people who make a living by farming, around 20 million people are facing unemployment in the country. With this in mind, Kola Masha set out to create an enterprise that would promote farming in Nigeria while also reducing the rate of unemployment. This goal led to the founding of Babban Gona, an enterprise Masha hoped would change the world of Nigerian farming for the better.

As of 2018, approximately 82 million Nigerians were living in poverty, which is defined as living on $1.90 a day or less. The population of Nigeria is approximately 200 million, meaning about 40% of Nigerians are living in poverty. There are many reasons for the high poverty rate in Nigeria. The social unrest in the country as well as the regional inequality between Northern and Southern Nigeria both contribute to the poverty rate. However, one of the most critical reasons for the large number of people living in poverty is the lack of job opportunities.

Faced with the growing unemployment rate of Nigeria, Kola Masha decided to found Babban Gona in 2012. The goal of the enterprise is to create more jobs by expanding crop production in rural areas of Nigeria. It focuses mostly on maize production and farming in Nigeria. The organization is currently working towards the goal of creating 10 million jobs by 2030. Though no easy feat, Babban Gona has gotten a good head start, as it already has over 100,000 members in six different Nigerian states. Masha believes that agriculture is the industry best fit for job expansion in Nigeria and is extremely hopeful that the industry will help create many more jobs.

The ‘Great Farm’ and What it Does

Babban Gona, which translates to “great farm” in Hausa language, works by providing its members with different farming-related aides that will help enhance their crop production. The company focuses on financial services, agricultural input services, training and development and marketing services. Once a farmer becomes a member of Babban Gona, they automatically have access to training that will ensure they are using the best techniques possible.

Agents of Babban Gona often teach members about water retention, seed planting and sustainable farming, among other essential farming methods. Babban Gona also provides members with storage facilities during the harvest season, which keeps crops from wasting and teaches their members about marketing. The enterprise also provides its members with access to much-need credit services. With funding by many different agencies and governments, including the Nigerian Sovereign Wealth Fund and the German government, Babban Gona is able to stay alive and continue to help its current members, as well as take in new ones.

Babban Gona is a revolutionary enterprise that is working hard to reduce unemployment and encourage agriculture in Nigeria. Through services like training, food storage and financial help, the organization is dedicated to helping its members excel. Babban Gona is changing farming in Nigeria by providing its members with invaluable skills that will no doubt benefit them for a lifetime, while also proving that ambitious ideas can become reality with some hard work and the right mindset.