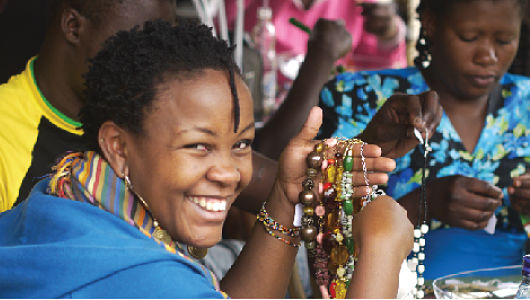 If you are guilty of spending too much money on beautiful handmade jewelry, consider making your next shopping trip online with Soko, a social enterprise that supports artisans in the developing world through a mobile web platform.

Similar to Etsy, Soko functions as an online marketplace, with every purchase directly benefitting its creator. The idea for Soko began with the collaboration of its three founders—Ella Peinovich, Gwendolyn Floyd and Catherine Mahugu, who were living and working around the slums of Nairobi, Kenya.

It was here that they met and spoke with women who were receiving just a fraction of the profit that they should be earning from their handmade jewelry. Although the founders saw the potential in the craft of these artisans, they also recognized the lack of a consumer market—something they set out to solve with the creation of their, company Soko, which means “marketplace” in Swahili.

Since its inception in 2011, Soko has been changing lives by providing an innovative way for artisans to reach a global market through mobile phone technology. By registering with the company, artisans can upload photos of their creations which are then available on Soko’s online shops. At the touch of a button, artisans can engage with brands, retailers and online customers from around the world.

All materials used from Soko are natural as well as upcycled—meaning that they are taken from old and discarded items to be created into something beautiful. Stylistically, Soko is conscious of the popularity of modern designs and works with artisans to design both sustainable and fashion-forward jewelry.

When asked to describe the company in one way in an interview with Inspire Afrika magazine, the founders said that they like to think of Soko as “empowering women.” Today, there are more than 1,000 artists in the Soko community, 41,309 products have been sold and the average artisan’s household income has increased by four times its former number.

It was Soko’s vision for a majority of profits to return back into the hands of the local artisans, and through Soko, women have not only gained the opportunity to engage with an international marketplace, but they have also found a way to ultimately improve their livelihoods.