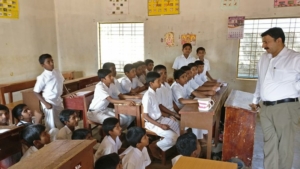 After 30 years, the government of India has finally revamped its standards in secondary and higher education. Among the education reforms in India, there has been an increase in socioemotional care, staff qualifications and access to innovative program opportunities in the public school system. These changes are significant for today’s Indian children, who made up 30% of the world’s poorest children in 2016.

In 2017, 22% of India’s population lived in poverty. Among them, 287 million were unable to read or write: the basic fundamentals of primary education.

India has the highest worldwide rate of illiterate children. Sadly, illiteracy makes many students unable to keep up in classes and causes them to be removed from the public school system. Disproportionately, 78% of the children out of school are girls.

Children who fail out of lower school due to illiteracy are in greater danger of falling or staying beneath the poverty line if their family is already facing hardships. Indian children who are not included in the school community face greater social seclusion and lack of community support. Without support and opportunities from their communities, these challenges greatly stunt a child’s socioemotional and economic growth.

Although there are difficulties, education reforms in India are growing. In 2019, the Indian government in New Delhi declared the 2019-2020 school year budget for public institutions to be ₹94,853.64 Indian rupees ($1,254). This was a raise of $149 U.S. dollars since the previous school year.

Although the New Delhi government is increasing its budget with the funds it can spare, India spends nowhere near the U.S. $64 billion yearly budget for public education.

Building the budget for public education in India means much more than funding for materials and updating technological services in school buildings. Along with a lack of access to education, many children in India are malnourished, making it more difficult to focus during school.

The budget has also increased the amount allocated for the lunchtime meal plan to ₹11,000 Indian rupees. Thus, students receive more services than classroom instruction while in the school building. This betters the overall physical and mental health of a student.

Is Socioemotional Learning the Future?

India has invested in enhancing the level of mental and emotional growth that a child can have at school. This includes self-enhancing and enlightening engagement from the school curriculum and staff. The benefits of these initiatives implemented by the government are making many nations around the world start to question the benefits of investing in their children’s emotional and social well-being during the school day.

Homelessness in Croatia Tennis in Poverty-Stricken Countries
Scroll to top