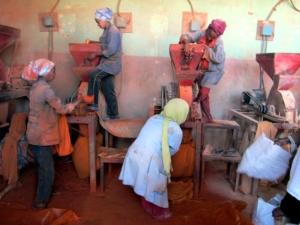 The Eritrean War of Independence oversaw a liberation on two fronts. The first was a divergence from Ethiopian colonial rule and the creation of a free Eritrea. The second was a women’s emancipation from culturally embedded subordination and the development of a semi-feminist state. The women’s movement began alongside the Eritrean War of Independence in 1961. It was quick to gain support and traction. The movement allowed women freedoms they did not have pre-revolution. However, as the state transitioned its focus towards a restructuring of administrative processes, the women’s movement lost steam and support. Now the Eritrean women fight gendered poverty. They are fighting issues such as malnutrition, the pan-African AIDS epidemic and limited access to education and health resources.

According to the World Health Organization, 53% of Eritreans are living below the poverty line. Further research conducted by UNICEF reported that female-headed households in Eritrea tended to be the poorest. Many long-standing traditions in Eritrean society, pre-dating the civil war, are sources of this income disparity between male and female-headed households. An example of these gender norms is the fact that Eritrean women were not allowed to own property; this often led to unemployment and as a result, a lower income. These outdated expectations cause female ex-combatants a great deal of difficulty in readjusting to gendered cultural norms.

Poverty hit the women of Eritrea women hard, but that has not stopped them from fighting. The National Union of Eritrean Women (NUEW) is a direct response to the feminist movement born out of the liberation war.

As an organization, the NUEW works with communities of women, including demobilized women fighters. The organization lifts women out of poverty through a combination of literacy programs, vocational training, income-generating activities and micro-credit schemes. In addition, another big part of the NUEW’s mission is promoting women’s participation in local and national government. In working closely with the Government of the State of Eritrea (GSE), the NUEW secured a hold on 30% of elected positions for women. After additional advocacy, the NUEW is working with the GSE to increase that number. The NUEW provided more than just relief programs to women in poverty; it created a space where women were able to have their voices heard.

While Eritrean women have had to overcome numerous hurdles in post-independence Eritrea, they did not do so alone. Eritrean women are fighting gendered poverty. The NUEW provides an invaluable service to Eritrean women through advocacy, education and relief programs. Today, the NUEW is working towards the total emancipation of women and continuing their efforts to raise their country up one woman at a time.

New Jobs in Pakistan: Helping the Unemployed During COVID-1910 Ways the EU Supports the Least Developed Countries
Scroll to top