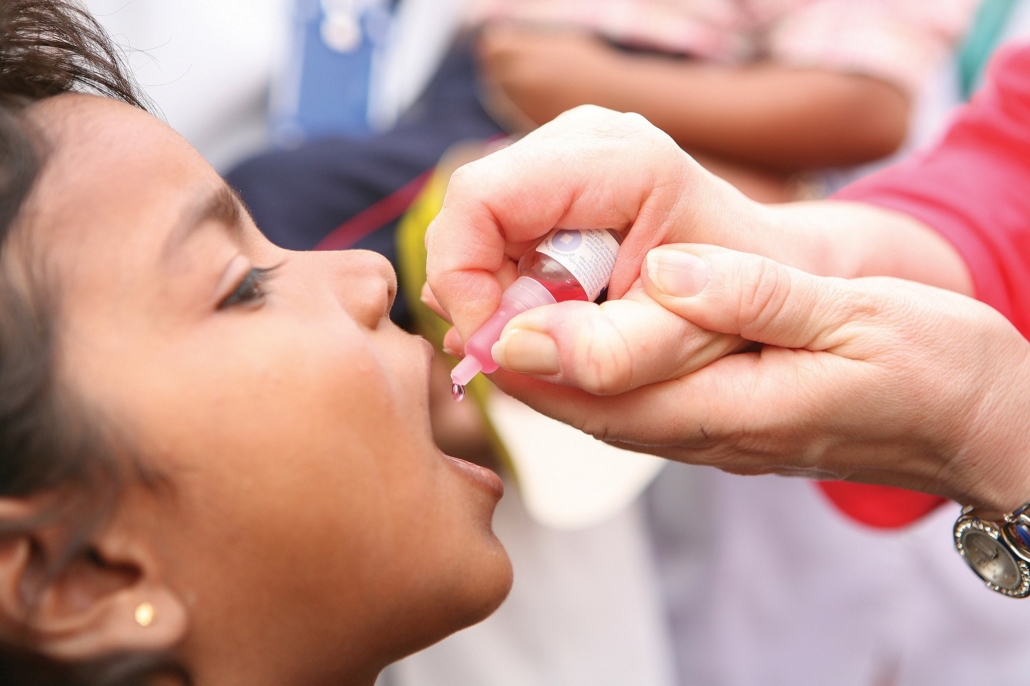 People often think of polio as a disease of the past; but for many in Pakistan, Afghanistan and Nigeria, it is still a very real threat. Poliomyelitis, more commonly known as Polio, is an infectious disease that can result in base level symptoms similar to the flu, or on the more extreme end, it can invade an individual’s spinal cord or brain causing paralysis. Paralysis is the symptom people most commonly associate with Polio because of how deadly it can be. As the disease progresses slowly, the individual eventually loses function across their body and requires outside assistance to do even the most basic task of breathing. Without medical assistance, the individual will asphyxiate. Here is some information about eradicating Polio in developing countries.

Vaccination is the only way to eradicate Polio. Children’s bodies become prepared to fight the disease more effectively with vaccination. Almost all children or 99 out of 100 will have protection from Polio as long as they receive all recommended courses of the vaccination.

However, sanitation also plays a key role in preventing the spread of Polio in the interim. The virus lives in individuals’ throats and intestines, so open sewage systems can leave a community more vulnerable to the spreading virus. The virus can thrive in feces for weeks before dying, leaving plenty of opportunities for people to come into contact with the virus and spread it.

Eradicating Polio is highly dependent on herd immunization, so it is integral that mass vaccination initiatives go to all corners of a country. By immunizing everyone who can take the vaccine, the risk of the disease spreading and those unable to take the vaccine contracting it reduces.

The Reasons Polio Still Exists in Pakistan, Afghanistan and Nigeria

Though there have been major advancements in eradicating Polio in Pakistan, Afghanistan and Nigeria, they still remain vulnerable due to the fear that the vaccine may cause fainting spells and death in children, which are false claims. Additionally, open sewage systems in rural areas and the difficulty to dispense full courses of vaccination to individuals in rural areas play a role in the continued life of Polio.

There is also the issue of spreading. In Afghanistan and Pakistan, the majority of new cases of Polio are often in the tribal areas surrounding the shared border of the two countries. The unchecked border often has people traveling back and forth so they are hard to pin down to receive their full course of vaccinations. This also allows for the virus to spread faster and makes it more difficult to isolate the infected.

Nigeria is doing relatively well with the fight towards eradicating Polio. The country no longer has an active outbreak, but it is at high risk of having an outbreak. This is due to active initiatives within the country to assure widespread vaccination and hygiene education to prevent the spread of the virus.

Another massive issue these countries and doctors are having with eradicating Polio is that the virus is mutating. In June 2017, there were 21 cases of vaccine-derived Polio in the world. This has been caused by remnants of the oral vaccine getting loose in the environment where it is regaining strength and infecting people. The oral vaccine is from a weak form of the Poliovirus that allows the recipient’s immune system to fight off the virus and become more adept at fighting the active virus if it ever enters their body.

Many also consider the mutated and strengthened strain of the vaccine-derived disease to be more deadly as it has a higher risk of causing paralysis in those infected.

The organization, Global Polio Eradication Initiative, is a public-private partnership working in tandem with national governments and private partners including the World Health Organization (WHO), Rotary International, the U.S. Centers for Disease Control and Prevention (CDC), the United Nations Children’s Fund (UNICEF) and the Bill & Melinda Gates Foundation. Together, they are attempting to roll out vaccines and education programs to aid in eradicating Polio internationally. The organization works with 200 countries and 20 million volunteers to ensure that everyone has the opportunity to live a life free of the pain Polio brings upon individuals and communities.

As of 2019, it has vaccinated over 2.5 billion children, and the number is only growing. This is an incredibly important program, as the alleviation of the threat of infection for every reduces the stress on government health programs. There is also a reduction in the personal and financial burden of contracting and surviving Polio from the shoulders of millions of families.

Through vigilant vaccination distribution and educational programs, the hope is that in the near future, people will be able to live in a world free from the crippling implications of the Poliovirus.