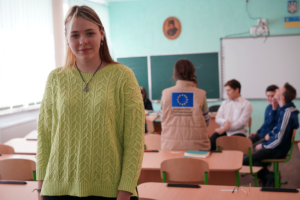 In Ukraine, the United States Agency for International Development (USAID) initiative “Decentralization Offering Better Results and Efficiency,” known as the DOBRE initiative, empowers youth leaders to promote change in their communities. The program, which ran from June 2016 through June 2021, succeeded in providing assistance to the Ukrainian government in order to fund decentralized reform and strengthen local communities.

Beginning in 2017, the DOBRE initiative worked with partner Global Communities, an international nonprofit, to sponsor annual DIY (Do It Yourself) youth forums. These forums provided young people with knowledge and experience on how to instigate change by revitalizing community assets. They also taught youth how to foster new opportunities for local development. Vasyl Telep is one student who took part in those youth forums. His first project installed new outdoor sports facilities in his local village to increase the opportunities for physical exercise. He presented and received support for his initiative from the government. Next, with his first success in his pocket, Telep registered his own non-governmental organization (NGO) and raised funds for the purchase of medical equipment for a local laboratory.

The DOBRE initiative allowed Telep and other youth to transform their ideas into realities. That is because the DOBRE initiative’s overarching mission was to provide international donor assistance to the Ukrainian government so that the government could fund decentralization reforms and aid the development of local communities.

The partners of the USAID DOBRE initiative also assisted local youth councils in organizing festivals for the youth of their community. For instance, the Starosaltivka Youth Council had partnered with the Kharkiv government to organize the “Jeans-Party” festival for more than 150 young people. The festival’s goals included keeping young adults off the streets. Also, the festival discouraged alcohol use. This goal was particularly pertinent because Ukraine has ranked in the top 20 countries for average annual alcohol consumption per person. Further, alcohol consumption in Ukraine has been especially severe among its youth.

The consumption of alcohol among Ukrainian youth has led to many young people losing their academic ambitions. Also, it has led to youth failing to pursue jobs that could contribute to the economic development of their local communities and Ukraine as a whole. On a positive note, Ukraine’s youth unemployment in 2019 was 15.53% which represents a 2.5% decline from the previous year. In fact, the youth unemployment rate declined each year of the DOBRE initiative from 2017 to 2019. One may be able to attribute this decline to the DOBRE initiative and the Ukrainian government’s efforts to engage youth with their communities and to incentivize youth employment.

Prospects Beyond Youth Forums and Festivals

Beyond volunteering in youth forums and festivals, the DOBRE initiative empowers youth leaders by preparing them for longer-term career opportunities with the government. After completing his work with his NGO, Telep was able to join the economic department of Baikovetska and he graduated to larger-impact projects. In 2018, he began working as a member of his local economic development working group to create a real estate database and raise awareness to the community about state subsidies and taxation. These efforts strove to help local entrepreneurs promote their products and services and access new markets. This underlines how the USAID initiative helped the youth unlock new opportunities and enabled them to increase their responsibility in the community if they chose to do so.