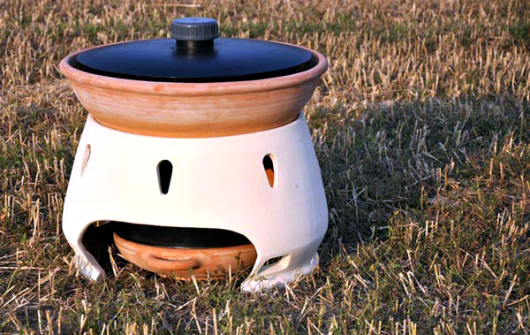 Despite these advancements, over 750 million people lack access to clean drinking water even today. That’s almost two and a half times the population of the United States without safe water. That’s about 1 in 9 people in total.

This is what Italian designer Gabriele Diamanti wanted to change with the Eliodomestico, a solar powered ceramic water purifier. The Eliodomestico boils water to separate the unwanted elements from the clean drinking water.

Diamanti wanted to make something simple and inexpensive, using materials found in the area so that a local craftsman could put it together. In the end, Diamanti built the Eliodomestico to work like “an upside-down coffee percolator”.

The Elliodomestico is made of terracotta, anodized zinc and recycled plastic. It consists of two ceramic containers, one atop the other. Salt water is poured into the top container, which then gets heated by the sun and converted to steam. The increase in pressure forces the steam to travel through a tube to the lower container where it re-condenses. The clean drinking water gathers at the bottom of the lower container.

The Eliodomestico collects about 5 liters of clean drinking water per day, and it only costs $50 with no operating costs. In addition, the bottom container can be easily removed and transported on the head of the user, a common practice in developing countries.

Because the Eliodomestico doesn’t use electricity or filters, it is easier to maintain and more efficient than other solar water purifiers. Most solar powered water filters use a solar panel, which increases the cost and the style-factor, but not the efficiency. The Eliodomestico is efficient, cheap and easy to use and maintain, making it a simple solution to a wide spread problem.