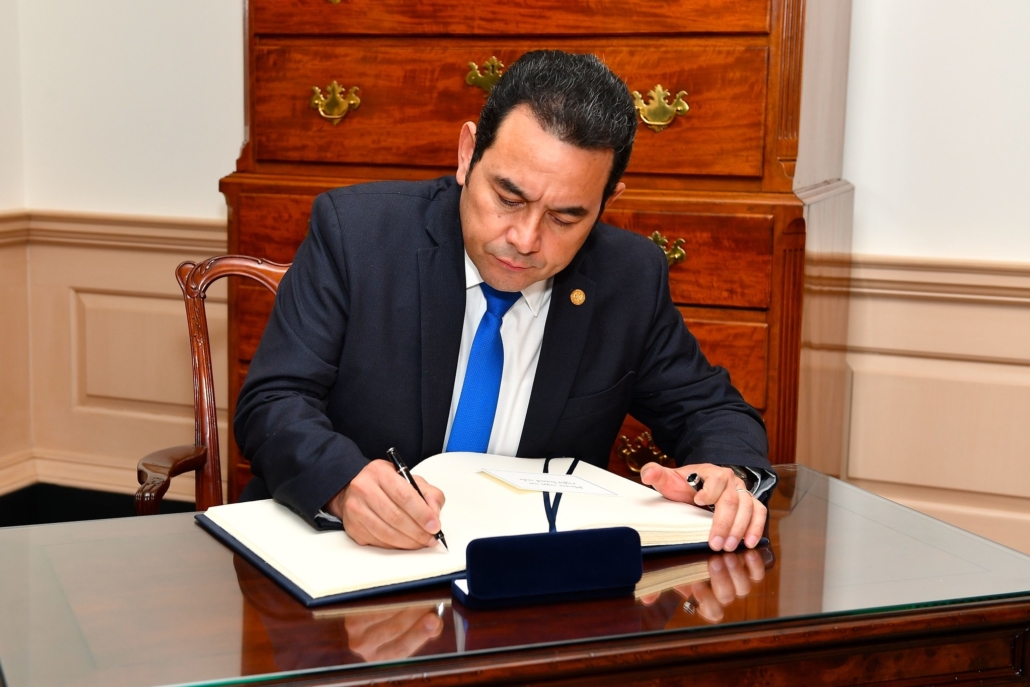 The United States has long been a sponsor and provider of aid to Guatemala, along with other non-governmental organizations backed by the U.N. Much of this aid has been to fight corruption—either the investigations of corrupt practices or the establishment of institutions to monitor and prevent corruption, impunity and organized crime.

As in many Latin American countries, particularly the Northern Triangle region (consisting of Guatemala, El Salvador and Honduras), corruption is ubiquitous from the local to national levels of government. Corrupt government leads to extractive institutions, which in turn leads to poverty, violence and mass emigration; at present, the majority of migrants at the U.S./Mexico border are from Guatemala.

In recognition of this, several political leaders and pundits of both parties have spoken out against proposed cuts to foreign aid, citing the need to stabilize the region by addressing the problem at its source. USAID and State Department programs focused on economic development have been widely successful, resulting in: increased access to nutrition for 230,000 children under the age of five, a 51 percent increase in rural agricultural sales, 20,000 new jobs in the agricultural sector, a 60 percent increase in American agricultural exports to Guatemala and many other improvements besides.

The long history of institutional corruption has not burdened agriculture, which allows for direct economic investment while the country focusses on anti-corruption efforts to dismantle impunity in other sectors—particularly in customs administration. The customs and tax administrations conducted the Linea bribery scandal of 2015, which resulted in the impeachment of President Otto Perez Molina and nearly 600 arrests. Since the Linea scandal, officials in multiple areas have been working with the UNODC (U.N. Office on Drugs and Crime) to combat the corruption that enables the use of Guatemala’s ports as drug trafficking avenues.

The UNODC and IACAC’s Efforts to Fight Corruption

While not as specialized as other anti-corruption programs and NGOs operating within Guatemala, UNODC has been instrumental in Guatemala’s fight against organized crime, with which governmental corruption naturally dovetails. In 2010, the drug trade alone was worth double the country’s GDP. The violence it generated (Guatemala has the 15th-highest murder rate in the world, out of 230 countries) dissuaded tourists and investors, which in turn contributed to the poverty that engenders corruption and organized crime, to begin with. However, with the help of UNODC along with other domestic and international programs, Guatemala has made significant economic progress. Its current GDP is nearly double what it was before the major anti-crime and anti-corruption initiatives began in 2010 and 2011.

International efforts to fight corruption in Guatemala have a long history, which has resulted in significant governmental reforms. The earliest instance of this was the adoption of IACAC, or the Inter-American Convention Against Corruption, which Guatemala ratified in 2001. The country has made substantial institutional reforms to maintain its compliance with IACAC, most notably a commission that allows for the coordination between the executive and judicial bodies, and its independent Association of Journalists. IACAC has also spawned several bilateral agreements with other countries—including the United States—to share evidence and otherwise support anti-corruption legal proceedings.

The reforms prompted by IACAC compliance had few immediate effects—within the first two years after ratification, Guatemala’s Corruption Perception Index (CPI) did not change enough to indicate a conclusive shift. However, the primary effect of IACAC has been to keep institutions updated and to keep corruption in Guatemala in the public eye. With the institutional reforms that IACAC prompted in the early 2000s, there was an existing framework for other anti-corruption initiatives to operate with much greater effectiveness.

The International Commission Against Impunity’s Success

The U.N.-backed International Commission against Impunity (referred to as CICIG by its Spanish initials) is the most successful NGO fighting corruption in Guatemala, which has prosecuted over 100 cases and obtained roughly 300 convictions since its establishment in 2003. Yet despite its impressive record, Guatemala’s current president, Jimmy Morales, attempted to end CICIG’s mandate before its natural expiration in November 2019. Guatemala’s Constitutional Court halted that decision and legal battles are still ongoing. Public support is heavily in favor of CICIG and the Court.

In the meantime, CICIG’s commissioner, Iván Velásquez, has taken the time to respond to the Morales administration’s accusations against CICIG in detail. Velásquez upholds CICIG’s record of convictions and dryly remarks that “[threats and smear campaigns are] foreseeable with respect to an entity whose purpose is to attack structures that co-opt the State to profit and refuse to lose privileges obtained illegally and illegitimately.” The country recently blocked Velásquez from re-entering, along with dozens of other CICIG staff, when Morales announced the premature termination of the commission. The country must continue to restore Guatemalan’s confidence in its elections.