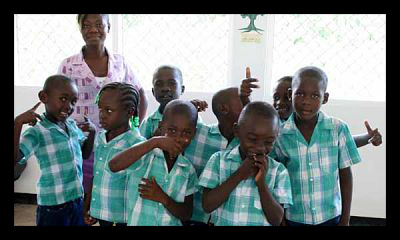 Suriname is the smallest independent country on the South American continent, slightly larger than the state of Georgia, and has a relatively small population. Suriname is mostly a tropical rain forest and the majority of the Surinamese population lives along the coast. Recently, UNICEF has made many efforts to reduce inequity in Suriname’s education system.

Although 97 percent of Surinamese children are enrolled in primary education, serious disparities exist between the coastal and rural schools and the interior. Suriname is nationally on track to meet Millennium Development Goal 2, but significant disparities in terms of gender and socio-economic status is significantly lacking progress and falling below the target.

There are various reasons why some children are more successful than others within the education system as well as why the disparities become increasingly evident as the pupil grows and progresses.

According to the United Nations Suriname, the “availability of schooling opportunities, accessibility of schools, quality and appropriateness of the education system affect the learners’ results in the highly varying education context in Suriname. Whereas the national gross primary school enrolment rates are high, enrolment and attendance rates in the interior are generally low in comparison to the national average.  Poor availability and quality of pre-schools and the sudden switch from local languages to Dutch, being the medium of instruction and texts books, could be identified as one of the main hurdles, resulting in high repetition rates in first grade and poor net completion rates in the interior.”

UNICEF has stepped in to reduce the inequities within the school system of Suriname. The UNADF Action Plan 2012-2016 will continue supporting the Ministry of Education and Community Development strengthening the capacity of kindergarten and primary school teachers in an effort to establish child friendly schools. Thirty percent of the teachers in the interior are not qualified to teach and in public primary schools, five percent have not even completed primary education themselves.

Plans have also been made to assist Suriname with the implementation of technology to provide a better education. UNICEF, in close cooperation with the Ministry of Education and Community Development, has implemented the Computer Aided Learning Project.

Malnutrition in Liberia, an EpidemicWhat is USAID?
Scroll to top