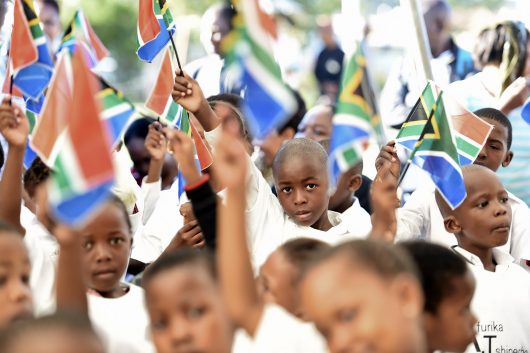 After the fall of apartheid, Nelson Mandela sought to reinvent an education system that had categorically denied blacks a quality education in South Africa. Mandela’s reforms ended racial segregation and unlocked equal funding for all universities and schools.

South Africa has developed a progressive education system – at least in theory. According to UNICEF, South Africa spends more on education as a share of GDP than any other African nation, providing free and compulsory primary education to all children aged 7 to 15, regardless of race.

Despite these achievements, a 2013 study published by the World Economic Forum ranked South African 143rd out of 144 in effective education systems.

South African schools face a myriad of problems. 78 percent of them don’t have computers or libraries, and 27 percent don’t have running water.

In addition to this, South African public schools are riddled with low performance rates. UNICEF reports that only 12 to 31 percent of South African students reach proficiency in their coursework. Two thirds of South African young people aged 14 to 18 cannot find work because they don’t have the preparation they deserve.

Regrettably, many South African teachers also lack proficiency in the subjects they teach. As a result, most South African students do not meet international benchmarks for math and science. Long hours and a critical lack of basic school supplies put even greater strain on teachers and school staff.

A 2009 South African Department of Education study found that 5.8 percent of female secondary school students dropped out of school after becoming pregnant. Teenage pregnancy rates have only increased.

Furthermore, a study conducted by the Centre for Justice and Crime Prevention found that 15.3 percent of South African primary school children had experienced violent assaults and robbery. Teachers and principals agree that children cannot learn in such an unsafe environment.

It has been 22 years since the fall of apartheid, and positive change is slow but evident. In 2013, UNSECO reported a 95 percent literacy rate among South African school-aged youth. This number shows great improvement. Education in South Africa is not a lost cause, and it will improve as teachers gain competence and schools gain the funding they deserve.

According to Nelson Mandela, “Education is the most powerful weapon which you can use to change the world.” As a free and democratic South Africa rediscovers its identity, quality education can be afforded to the children of tomorrow.