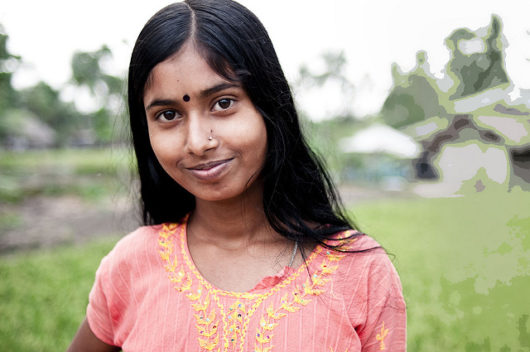 India, the home of 1.2 billion people, is a vast and diverse country. While the overall literacy rates have been on the upward trend recently, rising from 64.8 percent in 2001 to 74 percent in 2011, there are still approximately 1.7 million children who are out of primary school.

The main barriers that prevent children from accessing education in India are poverty, gender discrimination and lack of resources in schools as teachers lack training and schools are overcrowded. On the national level, 41 percent of schools lack basic hygiene service. There is either no facility or no water. The gap between male and female literacy rates has shrunk from 21.59 percent in 2001 to 16.68 percent in 2011 and the increase in literacy during the same period is 6.9 percent for boys and 11.8 percent for girls. However, there is still a persisting gap in the overall literacy rates as 82.1 percent of males are literate compared to 65.5 percent of females.

Children from marginalized underprivileged groups face other barriers to accessing education in India. They are often victims of trafficking, sexual and labor exploitation as well as domestic service. Some are forced to work to repay family debts. Forced child labor in India is primarily in the garment-making and quarrying industries.

Some children also perform dangerous work producing bricks. According to UNICEF, around 11 percent of children between the ages of 5 and 14 are working. The government has made efforts to deal with child labor, passing legislation such as the Child Labor Act, but the problem persists.

The OSCAR (Organization for Social Change, Awareness and Responsibility) Foundation aims to keep children in school by teaching underprivileged children from the poorest communities life skills and values through football. Children in the program learn not only to play the game but, more importantly, to value the education that empowers them to reach their full potential. The kids involved in OSCAR’s programs go on to become role models and make a positive change in their communities.

Akshay Chavan, a 16-year-old boy, has been with the organization for seven years. He is a player, coach and leader, currently pursuing his Bachelor’s degree in Commerce in St. Xavier’s college in Mumbai. As a young child, he suffered from an injury with lots of complications. In the 2017 Annual Report for OSCAR Akshay confessed: “On the first day itself, I felt welcomed. The coaches encouraged me to play, and the rest of the team was very supportive. They motivated me when I felt low. I developed a strong connection with OSCAR friends and started feeling confident enough to fight for myself.”

Founded in 2006, this nonprofit organization’s main goal is to prevent children from dropping out of school and improving education in India. So far, they have directly or indirectly impacted over 3,000 children in states like Maharashtra, Karnataka, Jharkhand and Ut Delhi. The organization nurtures and develops children’s talents and encourages them to become leaders and responsible citizens. OSCAR has three core programs: Young Leader’s Programme, Football Programme and Education Programme.

The Young Leader’s Programme aims to give young children the opportunity to create their own careers and make a change in their communities. Children older than 17 years in the football program who show potential to be good leaders are selected and go through a training process of workshops in football coaching and personal development.

The Football Programme teaches children from ages 5 through 22 not only football skills but also how to be consistent and value their education and focuses on girl’s empowerment.

The Education Programme is specifically aimed at children who struggle in school and provides them with educational assistance. They currently help 400 children in subjects like Hindi, Maths and English. As part of that program, the Foundation has three projects. They provide tuition and additional classes to pupils who experience difficulties in learning, teach children computer skills and offers scholarships to children from low-income families to complete their higher secondary education.

Over 30 percent of the world’s children living in extreme poverty are located in India. While everyone is negatively affected by poverty, children suffer the most detrimental effects. Living in poverty stunts their development, limits their access to education and keeps generations stuck in the cycle. Low-income communities have other issues related to poverty like substance abuse, early childhood marriage and gambling because education also influences morality.

Education and literacy’s positive outcomes are endless. They are linked to an overall improvement of the quality of life- life expectancy, infant mortality, nutritional levels, migration and other aspects of life. The OSCAR Foundation started out by addressing community issues in the Ambedkar Nagar slum in Mumbai and has grown to reach thousands of young people. By doing something as simple as holding several football sessions a week, they are transforming children’s lives and constantly improving children’s education in India.