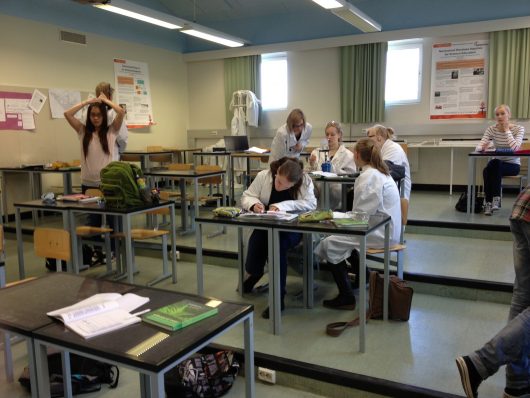 Education in Finland is prestigious and public. After 40 years of education reform to propel the economy, Finland has created some of the finest students in the world. In 2000, they led in reading, in 2003, in math and in 2006, in science. Since 2009, they consistently rank at the top for each subject in the Programme for International Student Assessment.

Not only does education in Finland produce top tier students, but the country has also created an education system that works for everyone. About 93 percent of Finns graduate from high school, 17.5 percentage points higher than the US, and 66 percent go to college, the highest rate in the European Union. Yet, Finland spends 30 percent less on education than the US.

Even with their amazing achievements in education, however, Finland has not yet found a popular following in implementing similar policies within other countries. In Finland, there is only one standardized test, unlike the U.S. and many Asian countries, where standardized tests are taken every year to measure students. Science classes are capped at 16. In the U.S., however, poorer public school systems pack many students into underfunded science classes. Teachers are also required to have master’s degrees, which are fully subsidized by the government, while the U.S. expects a bachelor’s degree without providing subsidies.

Although Finland may strive for excellence in education, they primarily value equality, a value missing in many American and Asian education systems. Whereas gifted students are separated into higher level classes in the U.S., Finland keeps all students in the same classrooms, providing extra help to those who need it. There are no private schools in Finland as all schools are 100 percent publicly funded. Each student has equal access to free school meals, health care, psychological counseling and individual student guidance, regardless of socioeconomic background.

As opposed to the U.S., where a good education generally means sending your kids to private or charter schools if you can afford it, Finland provides an equal education for everyone. Rather than creating a market for certain individuals to buy the best quality education, Finland created the base of its education system to help everyone. As opposed to Asian cultures that stress constant studying and competition between students, Finland prioritizes the students’ learning desires and fostering cooperation. There are no rankings for best schools or students.

Among other factors, Finland also selectively chooses its teachers; there is a 7 percent acceptance rate in Helsinki, which encourages constant retraining for teachers, creates broad curriculum guidelines and focuses more on quality time in the classroom. Education in Finland is clearly more relaxed and equitable, yet they still consistently boast the best scores. Although expensive private schools and exhaustive studying may produce similar results, they are not the most efficient strategies for a both equitable and robust education system.

Work in Progress: Reforming Education in HaitiVolunteering and its Effects on Empathy
Scroll to top