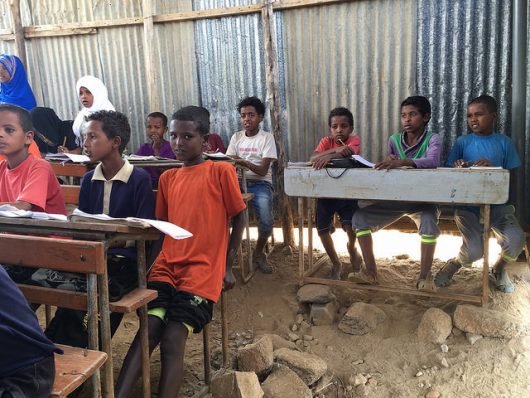 Eritrea is a very poor country, downtrodden by their struggle for independence, regional instability and environmental challenges. However, within the first decade of independence, the government of Eritrea made education a priority, and the new focus was almost immediately accepted as a valuable tool for lifting the country out of poverty. The government views education as a cornerstone for the nation’s development; for this reason, the nation focused on growing the amount of its schools and rural areas gained access to education. Yet, education in Eritrea still faces several challenges.

In 2013, education in Eritrea was supported by a grant from the Global Partnership to implement an education program through UNICEF. The program, “Enhancing Equitable Access to Quality Basic Education for Social Justice,” sought to help children from disadvantaged communities receive a quality education. This program consists of three key performance markers, which are:

Although the government has provided a free basic education policy and non-formal education programs, great numbers of children are still out of school. In 2015, UNICEF reported the net enrollment rate at the primary level was only at 81 percent — at least 19 percent of children are not enrolled in school.

The government of Eritrea provides primary education, but where they fall short is in the pre-primary level and retention rates. UNICEF stated that 79 percent of 5 year olds were not ready for school, and the organization’s report concluded that 70 percent of children between 11 and 13 did not attend secondary school. Furthermore, every year 5 percent of children drop out; and, an outstanding 13 percent of children repeat grades.

A great challenge for education in Eritrea is the quality of education. Complementary Elementary Education (CEE), a program supported by UNICEF, has done it’s best to educate the most disadvantaged students in Eritrea; yet,  there are still not enough desks nor textbooks for every student.

The literacy rate is at an overall 74 percent; for females specifically, the literacy rate sits at just 61 percent. In 2015, the Primary Gross Enrollment rate in Eritrea for men was 58 percent, while girls were left at only a 50 percent enrollment rate. During the same year, it was reported that Primary Completion Rate was at a 42.5 percent completion rate; boys were at a 45.4 percent rate, yet girls only amounted for 39.5 percent.

UNICEF has tried to aid in the elimination of the gender gap in education for Eritrea. CEE tries to educate children and young adults who initially missed the ability to go to school, and this program places a significant focus on girls between the ages of 10 to 14. Girls at this age are expected to marry soon, while boys are expected to do more serious jobs to provide an income for the household.

Furthermore, the Ministry of Education (MOE) has prioritized the expansion of educational opportunities for females. However, the MOE does not anticipate the gender gap in secondary education to be eliminated as quickly as it will in the primary level.

Eritrea’s education challenges will take time to overcome; yet, the nation is well on its way towards success. The government has implemented the Ministry of Education to create solutions and support in the development of education in Eritrea. With the help of aid groups, such as UNICEF and the Global Partnership, the nation is utilizing its foreign aid to help in its educational improvements.