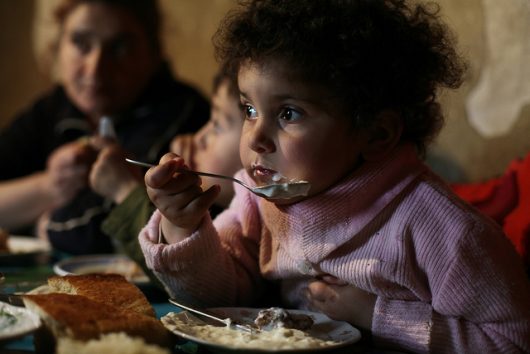 Azerbaijan has one of the largest displaced populations, as it is currently home to over one million refugees who are internally displaced people (IDP) hoping for asylum status. According to UNICEF, Azerbaijan has the highest IDP population per capita in the entire world; a majority of these people are Azeris, who have been displaced from their own homes due to the Nagorno-Karabakh war.

Azerbaijan is leading the Caucasus region in access to education for refugees. In 2003, Azerbaijan began allowing refugees to attend public school. However, since there is a large IDP population, inequities in refugee education are inevitably holding back universal education in Azerbaijan. Many refugee children do not have the same access to education as native children, affecting early, primary and secondary schooling.

A 2010 report indicates that about 20 percent of Chechen refugee children in Azerbaijan do not attend school, and of those who do attend, many cannot understand their instructors due to language barriers. This is common for many refugee populations in Azerbaijan. UNICEF notes that “most refugees have special linguistic needs since many do not speak the national language, straining teachers and school resources.”

It is common for displaced children to experience violence and hardship due to their refugee status, leading to many children requiring additional special psychosocial learning. Additionally, refugee children enter school later and tend to be less prepared for school, compared with the average Azerbaijani student.

Though Azerbaijan is working to ensure increased access to education for all children, many outside organizations have taken initiative to increase educational opportunities for refugees in Azerbaijan. For example, the U.N. High Commissioner for Refugees (UNHCR) found that oftentimes, refugee children do not go to school because their school materials are too expensive. To remedy this, the UNHCR created a textbook fund, giving more than 8,000 textbooks to about 2,000 refugee children.

In the future, there is a great deal of hope for the state of universal education in Azerbaijan.