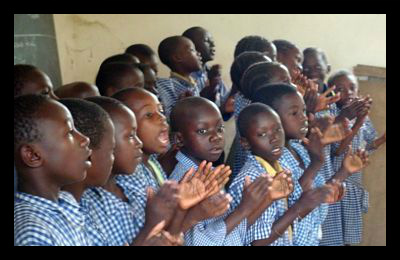 Located in west Africa, just slightly less than twice the size of Delaware bordering the North Atlantic Ocean and Senegal, lies the smallest country on the continent of Africa, the Gambia. Of the estimated 1,925,527 residents of the Gambia, 90 percent are of Muslim religion and the population can be deemed mono-ethnic with only 1 percent of the population reported as non-African.

The Gambia’s education expenditure was an estimated 4.1 percent of the GDP in 2012 and ranked 109th in comparison to the rest of the world. The Gambia’s literacy rate (defined as those who are 15 and over and can read and write) for the total population was estimated at a mere 51.1 percent in 2011 (male: 60.9 percent, female: 41.9 percent.) In comparison, the United States doubles this rate with 99 percent of the total population deemed as literate.

Typically, gambian children start school at age seven. From ages seven to 13, the students are enrolled in a lower basic school. At grade six, students take a placement exam.

At age 13, students enter an upper basic school for three years until they are 16 years old. Upon completion the upper basic school, the students take a Basic Education Certificate Exam (BECE) in nine or 10 subjects and this completes their basic education. Depending on their performance on the terminal examination offered in the ninth grade, the student may attend a Senior Secondary School or other Vocational Training provisions.

According to the U.S. Embassy, “Until 2002, primary education lasted for six years and led to the Primary School Leaving Certificate (phased out). Secondary education was divided into junior secondary schools, which offered a three-year course leading to the Junior School Leaving Certificate, and Senior Secondary schools which offered a three-year course. Since 2002, a new unified basic education system was introduced covering 1-9 years, through an automatic transition with no examination at the end of the lower basic cycle. The cycle is divided into two cycles: lower basic (Grades I–VI) and upper basic (Grades VII–IX).”

Admission to Senior Secondary/High School is very competitive in the Gambia. 75 percent of Gambian students attend government schools. According to the U.S. Embassy, “Secondary schools offer a variety of subjects in science, arts and commerce. At the end of Grade 12, pupils sit for the West African Secondary School Certificate Examinations (WASSCE) conducted by the West African Examinations Council. Students in all the 55 Senior High Schools take a Core curriculum consisting of English language, integrated science, mathematics and social studies. Each student also takes three or four elective subjects, chosen from one of seven groups: sciences, ‘arts’ (social sciences and humanities) or commerce (visual arts or home economics).”

The Ruble in the Rubble DREDF: People with Disabilities Serving Each Other
Scroll to top