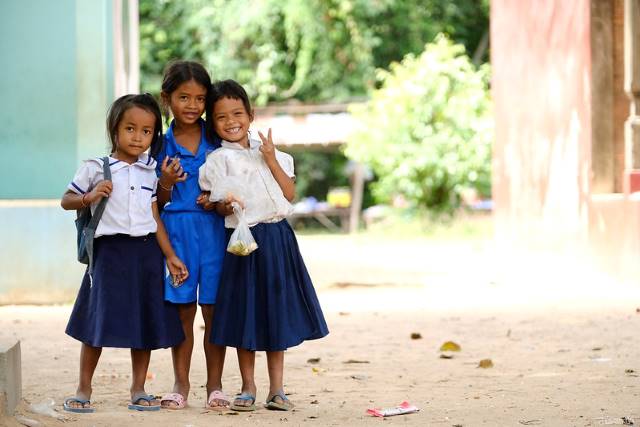 The Prevalence of Child Labor in Cambodia

The reason child labor is so prevalent is that many Cambodian families cannot afford to send their children to school and are in desperate financial circumstances. The costs involved in sending children to school include textbooks, uniforms and transport which families cannot afford. In the rural areas of Siem Reap Province, many people live below the poverty line on less than a dollar each day. As a result, they have to choose between food or education for their children. This forces children to work instead of going to school so they can help support their families.

Lack of education along with insufficient nutrition leaves children developmentally behind. Education is a lifeline for children to rise out of poverty but some children simply cannot afford the luxury of learning.

Part of the problem is the lack of schools in Cambodia. In the rural areas, there are few schools. One can trace this back to when the Khmer Rouge took control in Cambodia in 1975. Not only did schools close but the buildings either underwent destruction or the government took them over for use.

Many Cambodian teachers and students lost their lives at this time as well because intellectuals posed a threat to the society the Khmer Rouge was trying to create. Roughly 75-90% of teachers, 96% of university students and 67% of all primary and secondary school students died in the massacre that lasted from 1975 to 1979.

Rebuilding has been an essential part of improving Cambodian children’s education, a process that continues to this day. In 2020, the Cambodia International Charity Organization, a Chinese-run NGO, constructed a two-classroom school building for Treap Primary School in a remote village. The school headmaster said the existing school building has been deteriorating, making it difficult for children to learn when it rains.

This nonprofit organization emerged in 2004 with the mission of “transforming the lives of the most impoverished, marginalized and neglected children in Cambodia through high-quality education, leadership training and direct support programs.” The Cambodian Children’s Fund (CCF) works on the ground directly with children who are the most affected by poverty most effects and its programs have positively impacted the education of many impoverished Cambodian children.

In 2019, 1,855 children enrolled in programs that the CCF offered. The pass rate for students taking their grade 12 exams who had involvement with the organization was 84% in comparison to the nation’s 67%. The program also saw 33 university graduates in 2019, marking a total of 84 CCF graduates who have moved on from the program as successful young adults.

Sophy Ron is one of the many people the Cambodian Children’s Fund has helped. Sophy was 11 years old when the organization found her. She did not go to school and made a living selling items she could salvage from a landfill site. After the Cambodian Children’s Fund took her in and sponsored her, Sophy was able to pursue an education. In 2019, Sophy completed her first year of university after earning a scholarship to Trinity College at the University of Melbourne in Australia and gave the valedictorian speech for the graduating class of 2019.

While education is a key factor to help children like Sophy rise out of poverty, without the opportunities and resources available to impoverished families, education remains out of reach. Organizations like the Cambodian Children’s Fund and the Cambodia International Charity Organization make education for children in Cambodia a priority, ensuring that the cycle of poverty can break.