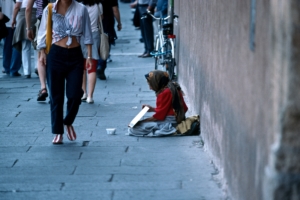 The economy and poverty in Greece are two subjects that connect to one another. Starting in 2010, Greece has been climbing its way out of an economic crisis. The country is slowly paying back billions of dollars in debt due to chronic fiscal mismanagement. In the last decade, poverty in Greece has grown rampant. Incomes have crumbled over 30 percent and more than one-fifth of Greeks are unable to pay rent, electricity and bank loans. Additionally, one-third of families have at least one member who does not have employment. Due to its financial downfall, over a third of Greece’s 10-million-person population is in poverty. Many citizens doubt that this nation will be able to turn things around fast enough and help those most in need.

5 Facts About the Growth of Poverty in Greece

According to economist and former finance minister of Greece, James Galbraith, the last decade will go down in Greek history as a period of asset-stripping, poorly funded health care and education, unemployment, bankruptcies and foreclosures, homelessness and even suicide.

While financial devastation has affected Greece and its people, there is some good news. Greece now has more control than ever before when it comes to its economy. For the first time since 2010, Greece can borrow money at standard rates. The hope is that Greece will be able to pay back loans faster and with less burdensome contingencies.

How the United States is Helping Greece

The United States government and its people are attempting to help solve the issues regarding the economy and poverty in Greece. One way that people can help is simply by donating. Foundations such as SOS Children’s Villages works with children, families and communities to prevent family breakdown and ensure that children’s rights are met. Meanwhile, The Hellenic Initiative is an organization that is answering Greeks’ call by providing a critical safety net to families that the crisis hit the hardest along with their relief partners. By donating to one or both of these organizations, children who have experienced abandonment or became orphans will receive a second chance, vulnerable families will be able to obtain psychological support and Greek hospitals will be better equipped.

Greek Americans who have dual citizenship can also help solve the problem of the economy and poverty in Greece because many can still vote in Greek elections and use their voices to make a difference. As for appointed leaders, Americans can urge their senators and congressmen to continue supporting Greece by exporting defense articles, medical, construction, food processing, specialty agriculture and packaging materials. Another way to show leaders that helping Greece matters is by simply emailing or calling them.

Though it has been a tough decade for Greece and its people, everyone and everything is capable of resilience. It may take a while for the nation to fully recover, but it can get there faster with a little hope from its people and a little help from the United States.